By Liana Keane | 3 months ago

Stranger Things Season 4 is coming. In September of 2019, Netflix announced Stranger Things would be back for Season 4. The announcement left fans excited for answers to the questions raised by the explosive 77-minute finale of Season 3.

Stranger Things released a behind the scenes video which shows the cast hanging out and having fun at a table read. It also confirms everyone coming back for Season 4. Watch…

Before the actual trailer there was a Stranger Things Season 4 teaser that starts with the title “Stranger Things 4.” Creepie music follows with the title being invaded by “roots” in the rot filled Upside Down and the words “We’re not in Hawkins anymore” being shown on the screen. The trailer ends with chimes of a clock. Here it is…

The title in the teaser may be a hint that the show producers are planning on exploring a new setting while the creepy clock indicates the series will “bend and move through time.” Since Netflix released the teaser trailer it has garnered over 10 million views.

How Much More Stranger Things Are We Getting?

Ross Duffer (who created the show with his brother Matt Duffer) told Vulture, “We think it will be a four-season thing then out.” In an interview with Entertainment Weekly, Shawn Levy, the executive producer, said the series would be going “for one more season.”

That’s right, Stranger Things Season 4 will likely be the show’s last. The Duffer brothers broke the hearts of many at Netflix headquarters when they announced they’re ending the show. But, Shawn Levy says, “the truth is we are going four seasons, and there is a likelihood for a fifth season but, beyond that, it is unlikely.”

Unfortunately, fans looking forward to binging all eight episodes of Stranger Things season 4 as soon as it drops may be out of luck. Word is that Netflix is looking to draw things out and so they may split season 4 into two halves. If they do that, they’ll only release half of season 4, then they’ll wait and at some later date release the second half.

Even though Stranger Things was supposed to end after season 4, they may call that second half of season 4 “season 5” but in reality it’ll just be the part of season 4 they didn’t release.

If Netflix sticks with this plan it’ll be for two reasons: First, the Duffer brothers may have decided they need a couple of extra episodes to wrap the show up. If that’s the case this is good news, since it’ll mean we could get more than the standard eight episodes for the totality of Stranger Things season 4.

Second, and perhaps most likely to be true: Netflix just wants to make more money off Stranger Things. They believe by drawing the show out artificially rather than letting fans binge all of the last season at once and be done with it, they’ll be able to earn more off Stranger Things season 4.

What Will Happen In Stranger Things Season 4?

We expect the Stranger Things Season 4 story will move beyond Hawkins as teased in the trailer. According to Ross Duffer, “it’s going to feel very different in Season Four, and I think it’s the right thing to do.”

In fact it’s starting to sound like the new season will abandon Hawkins as a location altogether. Deadline says the production is leaving Atlanta entirely for filming on Stranger Things season 4. Atlanta is where they’ve been shooting the exteriors of Hawkins. Instead of doing that, the production is moving to New Mexico where they say a “significant portion” of Stranger Things season 4 will be shot.

In the final episode of Season Three, Joyce Byers (Ryder) together with her sons and Eleven are moving after selling their house. We’re witness to a gutting goodbye with the others. So they’re moving and the show is moving forward, but where to?

Since the Russians were involved in Season Three, the show could include the Chernobyl disaster in the mythology. The Duffers also addressed why there’s an American in the Russian prison. Speaking to Entertainment Weekly, the co-creators said that the plotline will play a massive role in the Season. “The question of who the American in the cell and what they are doing with the Demogorgon is a tease.”

Fans were left to wonder: Is the American in the cell Police Chief, Jim Hopper?

Some of the wildest theories about where the show is going come from the Stranger Things cast themselves. Gaten Matarazzo, who plays Dustin on Stranger Things, threw this possibility out…

“My favorite theory is that Suzie’s actually a Russian mastermind and spy working with the Russian government. I think it’s so stupid and so funny. I hope that doesn’t play out because that would be weird.”

Matarazzo though, seems to be as in the dark as everyone else,when it comes to what’s planned for Stranger Things Season 4. He tells Variety, “It’s really hard to say because I don’t really know where the characters are going. He’s flapping in the wind at this point.”

The show’s writers have already tweeted the cover photo of Season 4 Episode One script. The title on the script is “Chapter One: The Hellfire Club.” Some fans believe this may be a reference to a plotline from Marvel’s X-Men comics, involving a club of mutants called The Hellfire Club. That connection, however, seems unlikely.

looking for new members… are you in? pic.twitter.com/P1xAWNUPss

The term Hellfire Club didn’t originate with the X-Men. The Hellfire Club was a real group of exclusive high-society men living in 18th century Britain and Ireland. Some believe the “Hellfire Club” title could be a hint that for Season 4, Stranger Things will head overseas to Great Britain.

When Will The New Season Be Ready To Netflix Binge?

Production on Stranger Things Season 4 began in October of 2019 but there is no specific release date for the new episodes yet. Looking back at the previous seasons, there were 15 months between the end of Season 1 and the release of Season Two.

Between Season Two and Season Three, there were 20 months. Using the information above, we can estimate that fans of Stranger Things will see the fourth season in 2021.

We expect the main cast to return for Stranger Things Season 4. That includes:

There are likely to be some changes for Gaten Matarazzo’s Dustin character which will be driven at least in part by the actor’s real life. Matarazzo suffers from a rare birth defect called cleidocranial dysplasia which affects teeth and bones. As a result he’s had to undergo several major surgeries over the course of his young life, and between seasons he just had another big one.

Here’s the photo Dustin posted before going in to surgery…

He looks positive in the photo but also a little nervous, understandably. We don’t know anything about how the surgery went or how he’s doing afterward, but we do know that Gaten’s condition was written into the show as part of Dustin’s character. Don’t be surprised if this affects the storyline for Dustin as the Stranger Things season 4 rolls out.

In Season Three, there were casualties. Billie, played by Darce Montgomery, is dead but may return as part of a cameo. Four new male characters will join the cast, according to TVLine. Those four characters include three teens and one adult.

While the show would not confirm the news, TVLine reports that the teens include a stoner character, a jock, and a metalhead. There is no news on what role or characteristics the adult will have. But since Season 4 may be set far away from Hawkins, he could be Russian.

Speaking of Russia, we are not sure if Chief Jim Hopper, played by David Harbour, will return. Also, we do not know if the series will reveal how the Russians were able to detain a Demogorgon.

Wait I’m New Here, What Is Stranger Things About Again?

Stranger Things first debuted in 2016. after series creators The Duffer Brothers signed a multiyear series and film deal with Netflix. Stranger Things is set in the small town of Hawkins, Indiana in the 1980s.

The first episode of Season One begins with the disappearance of Will Byers, who is abducted by a creature from another dimension called Upside Down. This is after researchers from the Hawkins National Laboratory open a gate to Upside Down.

While researchers are working for the United States Department of Energy, they are secretly experimenting with the supernatural, which also includes human test subjects.

Upside Down is a creepy alternate dimension, and its influence begins to affect the people of Hawkins. Joyce Byers, played by award-winning actress Winona Ryder, searches for Will with the police chief Jim Hopper. Meanwhile another girl, Eleven, escapes from the lab.

Eleven is psychokinetic and helps Will friends, Lucas, Dustin, and Mike to find Will.

Really though, if you haven’t seen the previous three seasons of Stranger Things you have no business worrying about Stranger Things Season 4. Get busy binging the other three first.

One of the shows would focus on the criminal family of Eleven. The show introduced them back in season 2. The other would be focused entirely on Joyce Byers and Sheriff Jim Hopper. What exactly Joyce and Jim will be doing in their series is currently unknown. Maybe we’ll see them exploring the 90s? We can’t stay in the 80s forever.

Johnny Depp is currently in court defending himself against allegations of abuse from his now ex-wife Amber Heard, while at the same time levelling similar charges against her. What does this have to do with Stranger Things star Winona Ryder? She’s being dragged into court along with them.

Winona’s statement reads, “He was never, never violent towards me… He was never, never abusive at all towards me. He has never been violent or abusive towards anybody I have seen. I truly and honestly only know him as a really good man- an incredibly loving, extremely caring guy who was so very protective of me and the people that he loves, and I felt so very, very safe with him. I do not want to call anyone a liar but from my experience of Johnny, it is impossible to believe that such horrific allegations are true. I find it extremely upsetting knowing him as I do.”

As for whether Ryder will be called in to testify and how this will affect her acting career or her work on Stranger Things remains to be seen. In the past there were rumblings that Hollywood was blackballing Johnny Depp over Amber Heard’s actuations. If true, taking Depp’s side could lead to a similar cold shoulder for Winona Ryder.

For more detail on this crazy, crazy legal mess head over to our Amber Heard vs. Johnny Depp Breakdown, if that’s your sort of thing.

Talk To Hopper Before Season 4

David Harbour, the actor who plays Sheriff Jim Hopper, spent the month of March in Coronavirus self-isolation like everyone else. And he’s bored. Really bored. So bored he just gave out his personal phone number to the public and asked them to send him texts. Here it is…

If you’ve ever wanted to talk to Hopper, now’s the time. Don’t just tell him you’re excited about Stranger Things Season 4 though. Bring something interesting to the table and tell him GIANT FREAKIN ROBOT sent you. 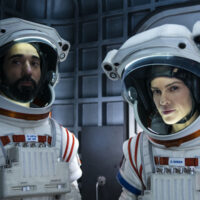 Coming Soon To Netflix: First Trailer For The Sci-Fi Series Away

Coming Soon To Netflix: First Trailer For The Sci-Fi Series Away