Marvel’s Phase 4 is going to have a much different look about it when compared to its recently concluded Phase 3. Phase 4 officially kicks off in May of this year with Black Widow but with Disney+ now part of Phase 4, the next big-screen movie after Black Widow will be The Eternals.

For those of you who are unfamiliar with the who’s and what’s behind The Eternals, fear not. We’ve got you covered.

Admittingly, when one thinks about Marvel characters, The Eternals probably aren’t at the top of many lists. Mainstream Marvel pretty much starts and ends with The Avengers and those associated with them. When Marvel announced that The Eternals would be a critical part of their Phase 4 lineup, there was visible confusion among some casual fans of the movies. Just who and what are these Eternals?

Jack Kirby was a force within Marvel Comics and DC. His creations or co-creations (with Stan Lee) pretty much built Marvel. His list of characters is long and impressive: Black Panther, Fantastic Four, Thor, Captain America, Iron Man, The Incredible Hulk, Kang the Conqueror and yes, The Eternals. Created in 1976 for Marvel, its ties go back to when Kirby worked for DC in the early ‘70s. He called it the New Gods and it was a series with sci-fi and mythological concepts. It was also a comic series that was to have a definite ending. But DC cancelled the series before it could be completed, so when Kirby went back to Marvel, he began working on a new series: The Eternals.

The Eternals was similar in theme to the New Gods and keeping in line with the New Gods publication, The Eternals was stopped at Marvel before its conclusion. They did, though, leave a lasting impression. Marvel has brought them back many times and has included them in various Marvel Comics, most notably Thor, Iron Man, Ant-Man, Wasp and Doctor Strange.

The Eternals was first secretly teased in Thor: Ragnarok with a scene where the film snuck in a ship from The Eternals comic…

WHAT ARE THE ETERNALS?

The Eternals are best described as “a race of god-like beings”. Upon their creation, they were meant to be protectors of Earth. The Celestials, the Eternals creators, visited earth over a million years ago performing genetic experiments on early humans. This created two divergent races: The Eternals and their foes throughout time, the Deviants. While the Eternals are near-perfect specimens, the Deviants are less evolved, genetically deranged and shockingly grotesque. Fun fact: the Avengers: Infinity War and Avengers: Endgame Mad Titan Thanos is a Deviant.

For the movie’s purpose, we will introduce the characters which will show up in it. Just know, there are many more related characters in the comic book world.

THENA – She is the daughter of Zuras, the leader of the Eternals of Earth.

IKARIS – One of the most powerful of the Eternals. He is virtually indestructible. With total mental control over his molecular structure, Ikaris could regenerate his entire body if he ever had to. He is immune to injury, aging, disease, and extreme temperatures.

KINGO – Is an Eternal through and through and as such, has all the powers of an Eternal. But in battle, Kingo prefers to fight traditionally as a Samurai. He is known as one of the best swordsmen on the planet as has spent centuries in Japan learning the Samurai ways.

AJAK – As a member of the Polar Eternals, Ajak also has the conventional powers of an Eternal. He has superhuman strength, the ability to produce cosmic energy from his hands or eyes. He can teleport and fly at the speed of sound.

MAKKARI – On top of being telepathic, Makkari is also known as the fastest of the Eternals. He also has the normal powers of the other Eternals. With control over his molecular structure, over the years Makkari has altered his appearance.

PHASTOS – He is a weapon-smith, known more for his weapon-making ability though he still possesses the same conventional powers as the other Eternals. Instead of the want to use these powers, Phastos is searching for meaning.

SPRITE – A child, but an Eternal nevertheless. He loves tricks and practical jokes and has a very playful personality.

GILGAMESH – He is known as “the Forgotten One” as he has been given many names over his existence, but his true name remains unknown. He holds the same Eternal powers and handcrafts his battle armor.

DRUIG – He is one of the virtually immortal Eternals and like all Eternals, the only way he can really be defeated would be the dispersal of all his atoms. But Druig also has the ability to be reborn.

SERSI – An Eternal who lives her life as an entertainer. She makes her home in New York and is well known for hosting parties for various superheroes, film stars, and other influential people.

THE CAST OF THE ETERNALS MOVIE

So who plays whom? The Eternals has a large cast and its led by Angelina Jolie as Thena. This not Jolie’s first time in dealing with a comic book character. In 2008, she starred in the comic book movie Wanted. Jolie has also been a star in various other sci-fi and action roles as she was the lead in two Tomb Raider movies, based on the video game. Of course, she has also starred in Disney’s 2014 movie Maleficent and its sequel Maleficent: Mistress of Evil.

Richard Madden (Game of Thrones) is on board as Ikaris and Kumail Nanjiani (The Big Sick) is Eternal Samurai Kingo. If you missed it, Nanjiani made news late last year with an Instagram post showing himself ripped and topless for his Eternals role. Check him out…

Changes are in store for those who follow the Eternals as Salma Hayek (Grown Ups), Lauren Ridloff (The Walking Dead) and Lia McHugh (Into the Dark) take on roles whose comic counterpartswere men. Hayek takes on the Ajak role while Ridloff will portray Makkari and McHugh will become Sprite.

Filling in the rest of the roles are Brian Tyree Henry (Paper Boi) as Phastos, Don Lee (Train to Busan) as Gigamesh, Barry Keoghan (Dunkirk) as Druig, Gemma Chan (Crazy Rich Asians) as Sersi and Kit Harington of the Game of Thrones fame as Dane Whitman, the Black Knight.

Marvel head Kevin Feige has indicated that the MCU will be including its first ever transgender character in one of their next movies. When asked about it he said, “Yes, absolutely yes. And very soon. In a movie that we’re shooting right now.”

At the time the question was asked, The Eternals was the only Marvel movie currently shooting. Kevin Feige has already announced the movie will feature Marvel’s first openly gay character. Given that and the ensemble nature of this film, it’s probably safe to assume that The Eternals is also the place Marvel will add a transgender character. Whether that character will be a significant superhero or just a random side character remains to be seen.

There was a rumor that Stranger Things Millie Bobby Brown was signed up to be a part of The Eternals but she shut down the rumor pretty quickly. She made it a point to do this on a live-stream on her Instagram stating, “OK, guys, this is the problem. Everybody thinks that I’m going to be in a Marvel movie. Not that I know of. My family and I have no idea. So, I just want to let everybody know that I’m not… as of right now.” Here is her denial:

Chinese-American director, screenwriter, and producer Chloé Zhao has been picked by Marvel president Kevin Feige to helm The Eternals. Zhao debuted with her feature film Songs My Brothers Taught Me in 2015 and followed that with her second feature The Rider in 2017.

Feige had this to say on a podcast with The Hollywood Reporter about Zhao and The Eternals, “It is a very big movie. It is a very expensive movie. And we are making it because we believe in her [director Chloe Zhao] vision and we believe in what those characters can do and we believe we need to continue to grow and evolve and change and push our genre forward. That’s a risk if I’ve ever heard one.”

Cousins Matthew and Ryan Firpo have been hired by Marvel to pen the script. Seems the duo caught Marvel’s eye with their spec script, Ruin, a story about an ex-Nazi captain who hunts down former members of his SS Squad, that landed on the Black List and that project has since attracted the likes of Gal Gadot (Wonder Woman) and Marc Butan and his MadRiver Pictures.

THE PLOT OF THE ETERNALS

So we know who and what the Eternals are. We know who created them. We know who they’ve been fighting for millennia. But do we know if any of that plays into the plot? No, we actually don’t.

So far not much is known about The Eternals movie’s story. Madden hinted at what the story involves at the 2019 San Diego Comic-Con but it was a generalization, “The Eternals are a race of immortal aliens sent [to Earth] by the Celestials to protect humankind from the Deviants.”

We know the Celestials will show up on screen, since Marvel just released this piece of artwork, showing off a Celestial as it will appear in the movie…

Zhao took it a teeny bit further at the SDCC, “For this film, The Eternals, it’s about this incredible group of immortals but, through their journey, we get to explore what it means to be human.”

Feige wasn’t much more help when he told ComicBook.com, “It will be a story that will introduce you to this incredibly eclectic group of immortals, they’re the focus of the story.” He said of the setting: “It takes place in our universe – it takes place in the MCU.”

MARVEL’S RELEASE DATE FOR THE ETERNALS

WHERE IS THE FIRST TRAILER?

So far we here in the U.S. have not seen a trailer for The Eternals. That doesn’t mean one doesn’t exist. At the Brazilian Comic-Con Experience 2019, the Marvel Studios panel surprised its audience with a peek at the upcoming movie. IGN posted a description of the trailer, but to date that is all we have. There has been no announcement as to when a U.S. trailer will arrive. 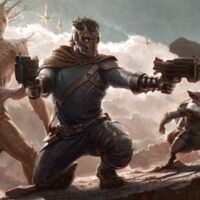 Guardians Of The Galaxy Will Be Set Mostly In Space 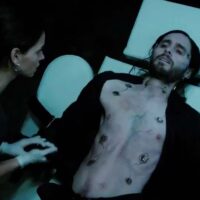