Margot Robbie Has One Of The Most Popular Movies On Streaming

Just a year after its release, Birds of Prey (and the Fantabulous Emancipation of One Harley Quinn) is currently the most popular movie on HBO Max globally. While audiences weren’t blown away by Suicide Squad, fans did love Margot Robbie’s performance as Harley Quinn. Birds of Prey is the solo follow-up fans waited for. Release wide in February of 2020, for many, it was the last movie they saw in theaters before theater shutdowns began. Now, the action movie from DC is streaming and those who missed it in theaters are finally getting a chance to catch up.

Birds of Prey finds Harley Quinn fresh off a bad breakup with Joker, and she’s going through some typical breakup blues. Harley blows some things up, cuts her bangs, then Margot Robbie’s character gets herself involved in protecting a young girl from an evil crime lord, as one does. Moving forward, she teams up with a new group of superheroes, including the introduction of Black Canary, Huntress, and police officer Renee Montoya.

There were high expectations for Birds of Prey, and while Margot Robbie’s debut as Harley Quinn in Suicide Squad was noted as one of the only good things in the movie, it did really well at the box office. Warner Bros. had cautiously put out estimates that they would make a low $45 million in North America during Birds of Prey‘s opening weekend, but the film only made $33 million. In the end, the film earned $201 million worldwide, which was less than a third of what Suicide Squad earned.

The full title, Birds of Prey (and the Fantabulous Emancipation of One Harley Quinn) is blamed as one of the reasons this movie didn’t do as well at the box office as anticipated. In fact, after its release, Warner Bros. renamed the movie Harley Quinn: Birds of Prey. This made it easier for audiences to recognize the title, search for it on movie theater websites, and put Margot Robbie’s character front and center.

After box office numbers settled, Birds of Prey 2 was eventually canceled. Despite this, we haven’t seen the last of Margot Robbie’s Harley Quinn. Robbie will be reprising the role of Harley Quinn in The Suicide Squad, which is currently in post-production. There are rumors we may be seeing her in a movie that would center around Quinn and The Joker, and there is still talk of a Gotham City Sirens movie. The possibility of more projects seems strong, since despite the box office numbers for Birds of Prey, audiences still want to see more of Margot Robbie as this character.

Box office numbers aren’t necessarily a good indication of the success of a movie, however, since Birds of Prey is currently doing extremely well on HBO Max. Birds of Prey is one of the lightest and most playful films in the DC film universe, a film where you can watch glitter bombs explode, and see Margot Robbie’s Harley Quinn fall in love with a breakfast sandwich?

This R-rated DC movie is beloved by those who like fast-paced fun, but the film received mixed reviews. Joe Morgenstern of the Wall Street Journal called the film a “richly hued, madly inventive, gleefully violent and happily slapdash contraption with a formidable female at its center.” Not everyone was as complimentary, as A.O. Scott of The New York Times said, “Birds of Prey is happy to play at provocation with swear words and violence while carefully declining to provoke anything like a thought. As of right now, Birds of Prey has been shortlisted at the Oscars for awards in Makeup and Hairstyling and Visual Effects, so the Margot Robbie film could soon be an Academy Award nominee as well.

While we may not be seeing Margot Robbie in Birds of Prey 2, we will definitely be seeing her again. Right now, she is filming a mysteriously untitled project from David O. Russell. All we know at this point is that Robbie has been spotted with black curly hair and made almost unrecognizable. It’s also been announced that she will soon be working on a Barbie movie, so it’s safe to assume she’ll be back to blonde soon enough. The film is being written and directed by couple Greta Gerwig and Noah Baumbach.

Birds of Prey has action, adventure, and a lot of style. Margot Robbie continues to shine with her take on Harley Quinn, especially post-breakup with Mr. J. It’s no wonder that a year later, this movie is taking off on HBO Max streaming. If this movie is new to you, prepare for one of the most lively, colorful and fun films to come out of the DC Universe. 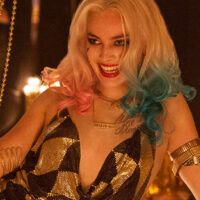