Logan director James Mangold takes to Twitter to tell all of his fans to "chill," and to say he's as thrilled to as the rest of us to see the Deadpool and Wolverine meet-up.

Logan director James Mangold has responded to fan anger over the news that Hugh Jackman will reprise the role of Wolverine in 2024’s Deadpool 3, and it can be summed up with “everybody chill.” While he teased fans with an opening tweet of X-24 impaling Wolverine–potentially signaling he felt betrayed–he followed it up by letting his fans know he was “Just kidding,” that he doesn’t think this news hurts the integrity of Logan, and that he’s excited to see the film.

Some Logan fans have been a little–perhaps understandably–upset with the Deadpool 3 news considering James Mangold’s Logan ends with Hugh Jackman’s character’s heroic death, which was meant to be the definitive end to Wolverine’s story. However, as Mangold writes, “LOGAN will always be there. Multiverse or prequel, time warp or worm hole, canon or non-canon or even without a rationale.”

Even without James Mangold’s feelings on the matter known, Hugh Jackman and Ryan Reynolds have already explained that the events of Deadpool 3 take place before Logan, which is set in 2029. In fact, it’s just about all they’ve explained because the rest of their “explanation” is muted over Wham’s “Wake Me Up Before You Go-Go.”

Not to mention that long before James Mangold, Hugh Jackman, or anyone else knew the Deadpool 3 news the Fox X-Men timeline was already a little murky. While the end of 2014’s X-Men: Days of Future Past gave Bryan Singer the excuse to turn the clock back, it also brought up a lot of questions about where everything fit into the timeline.

You might wonder, for example, why the Colossus of the X-Men films (Daniel Cudmore) was a tween (and remained the same age in the future) without an accent, while the Colossus of the Deadpool movies (Stefan Kapicic) was a grown Russian man. And of course there was the collective understanding–“without a rationale” as Mangold put it–that it was okay to just ignore 2009’s X-Men Origins: Wolverine and hope that it would go away.

James Mangold fittingly caps his message with a screenshot from the 1982 buddy-cop click 48 Hrs., making what we think is a pretty good prediction about the Hugh Jackman/Ryan Reynolds chemistry we can expect in Deadpool 3. Directed by Walter Hill, 48 Hrs. starred Nick Nolte as a surly, alcoholic cop teamed up with the clever and disrespectful Eddie Murphy as a convicted felon.

The pair harbor nothing but disgust for each other for most of the film, and Nolte regularly treats Murphy to casual sucker punches; culminating in a street fight between them that leaves both bloody and barely on their feet. Along with being a huge win for Nolte, 48 Hrs. was Murphy’s first feature role and the flick helped sell him in future action-comedies like his later hit, 1984’s Beverly Hills Cop.

No doubt James Mangold is predicting that, like Nolte and Murphy in the earlier film, Deadpool 3 will feature Hugh Jackman and Ryan Reynolds’s Marvel characters at each others’ throats as often–if not more often–than those of whatever villains they’ll be facing. 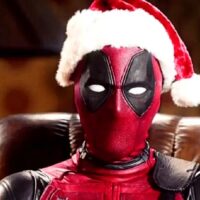