Kevin Bacon Once Had To Fake Being A High School Student

Kevin Bacon confirmed that he went undercover as a high school student to prepare for Footloose.

By Vic Medina | Published 6 months ago

Hey kids! Your parents may be within six degrees of separation from Kevin Bacon and not even know it! If they went to high school in Provo, Utah in 1983, Bacon may have been their classmate, at least for a day. The Emmy-nominated star of classics like JFK, A Few Good Men, and Animal House recently appeared on an episode of First We Feast’s Hot Ones on YouTube and confirmed a long-circulating story that he did indeed go undercover as a high school student to prepare for his role in the eighties classic Footloose. You can watch the full episode, in which Bacon endures a gauntlet of chicken wings that get hotter than the one before, right here.

ComicBook.com detailed the Apollo 13 star’s experiences, in which a 23-year-old Bacon posed as a student for a day at a Provo, Utah high school, where Footloose was being filmed. He admits to being unsure he could pull off being a teenager for the film, so with the principal’s blessing, he tried it out, and his experiences echoed those his character would experience in the film. In Footloose, Kevin Bacon played Ren, a Chicago teen who moves to a small Midwestern town, where dancing is outlawed and he is a fish out of water. Bacon said his return to high school to prepare for the film found him in the same role and having the same experiences as his character, clashing with some kids while making friends with others, none of whom knew he was an actor.

Calling it “the world’s dumbest ride-along,” he said the experience traumatized him so much that at the end of the day, all he wanted to do was hit a bar. “It was so much like the movie, I can’t tell you,” Kevin Bacon said. “Some of the badass kids were…fronting with me in the bathroom and stuff. And then there was this big, corn-fed dude who took me under his wing and was like ‘Y’all back off. I got it, he’s okay.’ And the girls, when I walked down the hall, were giggling.” Not only were students kept in the dark, teachers were too, and it’s not clear if they ever discovered that a movie star walked among them for a day.

This isn’t the first time Bacon has talked about his unusual research method in preparing for the role of Ren. In an episode for Variety’s Actors on Actors, Kevin Bacon and his Footloose co-star John Lithgow talked about the incident. Lithgow played Rev. Shaw Moore in the film, who led the charge to keep the town’s kids from dancing, until Ren changes his heart. The film was actually based on a real incident in an Oklahoma town, where dancing was outlawed until 1980, when high school students were finally allowed to organize a prom and dance.

Footloose made Kevin Bacon a bona-fide movie star, following his role in 1982’s critically acclaimed Diner. He starred in a number of commercial hits in the 1980s and 1990s, including Tremors, Flatliners, The River Wild, Wild Things, and Hollow Man. In recent years, he went on to star in films like Frost/Nixon, X-Men: First Class, Black Mass, and Patriots Day. His new film, They/Them, premieres on Peacock this month. Footloose is known just as much for its music as the film itself, with Kenny Loggins’ title track and Deniece Williams’ “Let’s Hear It for the Boy” both topping the Billboard charts at #1. The soundtrack was the #1 album in the country for two straight months in the summer of 1984. It had six Top 40 hits, including “Holding Out for a Hero” by Bonnie Raitt, “Almost Paradise” by Ann Wilson and Mike Reno, and “Somebody’s Eyes” by Karla Bonoff. 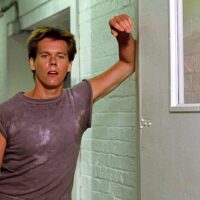 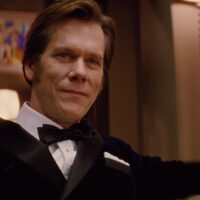 Kevin Bacon Heading Back To His Best Franchise?