Out Of Nowhere Kate Beckinsale Has A Sexy New Action Movie, See The First Trailer

Amazon Prime Video just delivered a neon-colored, explosion-filled trailer with Jolt, a new action movie starring Kate Beckinsale. We didn’t see this one coming but sure are pumped considering it looks like a frenetically paced and action-packed good time.

The film has a twist on the classic revenge story. Kate Beckinsale is a bouncer with a serious anger problem. To keep it under control, so she does not go full John Wick on people, she electrocutes herself with a gadget made to reduce the likelihood she snaps. When her boyfriend is killed, it is time to throw away her temper manager and get to breaking bones, exploding buildings, and shooting bad guys. Check out the trailer.

The trailer establishes the motivations of the protagonist that Kate Beckinsale plays. We get a look at the police officers who are pursuing her and the villains who wronged the pissed-off heroine. It sets up the basic premise of how she keeps her temper under control and the risks of what happens when she forgets to give her a jolt to calm her nerves. Oh, and of course, we see a ton of action-filled with martial arts, kung-fu, and fireballs from massive explosions.

The director and writer are not as recognizable as the leading star. Tanya Wexler will be helming the action-packed flick for Amazon Studios with Kate Beckinsale in the lead. The filmmaker’s resume is a bit on the shorter side. Her latest feature was Buffaloed, a 2019 comedy-drama about debt collection starring Zoey Deutch (Zombieland: Double Tap). Without any experience in the action genre, it should be interesting to see how this turns out. Scott Wascha has nothing credited to him that has been widely released, so this debut will surely make for a good starting point.

Kate Beckinsale will have co-stars with just as big of names as her’s. Starring with the lead consists of Jai Courtney (Suicide Squad), Bobby Cannavale (Boardwalk Empire), Stanley Tucci (Spotlight), Laverne Cox (Orange Is the New Black), and David Bradley (Game of Thrones).

Action is not something new to Kate Beckinsale. She made her name in the genre with the Underworld franchise from Sony Pictures, which she stuck to for five movies, the last being Blood Wars in 2016. In between that, she also did the 2004 movie Van Helsing with Wolverine himself, Hugh Jackman. This electric, neon-lit return will be a change of pace for her as she steps away from vampires and other fantastical monsters while still keeping a level of fantasy with her character’s condition.

Besides beating people to a pulp to avenge a lover’s death, Kate Beckinsale has a range to offer for the foreseeable future. She is set to star in Charlie Day’s (It’s Always Sunny in Philidelphia) directorial debut El Tonto, a comedy that will also star Travis Fimmel (Vikings), Jason Sudeikis (Ted Lasso), and Katherine McNamara (Arrow). The other project is Prisoner’s Daughter, a drama from Twilight director Catherine Hardwicke with Mark Bacci (Northern Rescue) penning the script.

While you wait for the July 23 release date on Amazon Prime, you can check out the stylish trailer as Kate Beckinsale causes mayhem and unleashes her fury upon the men who wronged her. 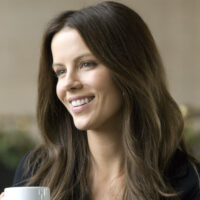