John Krasinski could be joining Tom Cruise in taking on the mantle of a popular Marvel superhero. According to a new rumor, the superhero franchise is looking to cast the Jack Ryan and The Office alum to play Steve Rogers in the upcoming Sam Raimi film, Doctor Strange in the Multiverse of Madness.

The plan is to showcase a variety of alternate universes in Doctor Strange in the Multiverse of Madness. John Krasinski would be playing a version of Steve Rogers a.k.a. Captain America from another world. Exactly how much screen time he would get is not exactly clear at this moment, but much like the news we ran about Tom Cruise appearing as Tony Stark/Iron Man, it is assumed this would be a cameo appearance at the most.

Also like the Tom Cruise info, the casting of John Krasinski as an alternate universe Captain America would act as a bit of a winking acknowledgment to the actor’s prior connection with the role. Over a decade ago, Krasinski was one of the final actors on the shortlist for the lead role in Captain America: The First Avenger. Obviously, the part went to Chris Evans and the rest is history. Still, this bit of meta-casting would be a very cheeky way to give us a look at the Captain America we might have gotten.

Of course, this also means that John Krasinski would be officially brought into the Marvel Cinematic Universe and could always appear again. With Doctor Strange in the Multiverse of Madness introducing the limitless concept of alternate universes, all the alternate universes we see will become canon in the Marvel Cinematic Universe. That means the franchise could utilize them at any time in the future that they wanted.

Would this mean that John Krasinski could become a brand new Captain America in a feature film series? Again, it is likely that his appearance would be nothing more than a fun cameo. Still, the Marvel Cinematic Universe is about to enter its weirdest and wildest phase as we have seen with the recent trailer for the upcoming Disney+ series WandaVision. Moving forward, the chances of crazier and crazier things happening in the world of Marvel are more likely than they were before.

In the meantime, it is very fun to imagine what John Krasinski’s take on the iconic superhero could be like. Hopefully, this rumor will turn out to be true and we can see exactly what Jim Halpert will bring to the table when he throws that vibranium shield at a supervillain. Doctor Strange in the Multiverse of Madness is set to open in theaters on March 25, 2022. 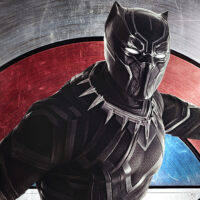