Even though film and series productions have been resuming across the globe, the coronavirus pandemic continues to make its presence felt despite the many safety precautions in place. After Bridgerton Season 2 recently came to a standstill for the second time due to a positive COVID-19 case, the Game of Thrones prequel series House of the Dragon has now shut down production due to someone from its cast or crew testing positive.

The Game of Thrones spinoff fantasy drama recently started production in April 2021 to meet its plan of debuting on HBO in 2022. But Deadline has reported that the ongoing shooting of House of the Dragon in the UK was paused after a positive COVID-19 case was discovered. As per the industry guidelines, the production member is now in quarantine and so are the people the person came in contact with. The production of the series will resume from July 21.

While House of the Dragon will be back on track soon, the same can’t be said for the other Game of Thrones spinoff series that had been in news. Recently, HBO content chief Casey Bloys disclosed a grim update about the future of all the Game of Thrones spinoff and prequel series that had been planned since 2017. While it was believed that all these proposed series are in various stages of development, he clarified that only House of the Dragon has been greenlit by HBO and began production. The network is yet to give its nod of approval to the remaining series.

So, the Game of Thrones series whose fates still hang in the balance are 9 Voyages based on the adventures of Corlys Velaryon, 10,000 Ships that will supposedly chronicle the voyages of warrior Princess Nymeria, an adaptation of George R. R. Martin’s Tales of Dunk & Egg novellas, and an animated series at HBO Max. The Hollywood Reporter recently disclosed that HBO is not moving forward with Flea Bottom, which was going to be set in the infamous King’s Landing slum, and instead, HBO Max is now developing two more animated Game of Thrones shows.

For the time being, House of the Dragon is the only Game of Thrones that has begun production. The series will tell the story of House Targaryen, Daenerys Targaryen’s ancestors, set some 300 years before the events of GoT.  The prequel series is co-created by George R. R. Martin and Ryan Condal, who is also the showrunner alongside Miguel Sapochnik. The three are also onboard as executive producers along with writer Sara Lee Hess, Vince Gerardis, and Ron Schmidt. 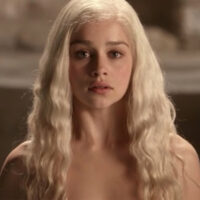