According to one of our trusted and proven insider sources, Demon Slayer is being eyed for a live-action movie adaptation and the project is in development. Honestly, considering the gargantuan success of the franchise, this is not the most surprising news to hear. Producers are always looking to exploit the newest big craze and it looks like Demon Slayer is the next thing on the menu. What will be interesting is how this project will develop. The story is set in the Taishō era of Japan which lasted from 1912 to 1926. Would the live-action movie take place in the same time period and the same location?

Or is Demon Slayer going to be reconfigured for American audiences? Will it drop its Japanese elements and try and adapt them into an American setting? The thrust of the story concerns Tanjiro Kamado and his quest for revenge after his family is murdered by a demon. Only his sister, Nezuko Kamado, survives the attack but she has been turned into a demon. So they also are searching for a way to cure her demonic affliction. This ends up involving a secret society that has been at war with demons for hundreds of years. The basic plot beats are general enough that they could be changed into an American setting, but would that lose a lot of what fans like about the property?

It all depends on what kind of adaptation the producers of Demon Slayer want to do. There are certainly instances of adaptations changing the setting and era of stories to a successful degree. Just look at how Akira Kurosawa’s classic samurai film Yojimbo was changed into the equally iconic Western A Fistful of Dollars. And in the reverse, Clint Eastwood’s award-winning Western Unforgiven was also remade as a Japanese film that changed the setting to Japan during the Meiji era. This all goes to show that adapting a work and changing its regional nature does not always result in a poor product.

But, fans will likely want to see the Demon Slayer they know in a live-action adaptation, so we are betting that the project will develop as a fairly faithful take on the hit series. Considering the massive success of the franchise up to this point, we would not be surprised if this is getting the fast track as soon as possible. 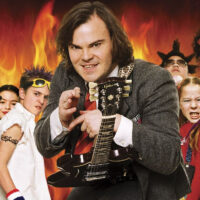 Exclusive: School of Rock 2 In The Works With Jack Black