Eddie Murphy starred in the 1995 film Vampire in Brooklyn, which fails at both comedy and horror.

Eddie Murphy is one of the great comedic figures of the 20th century, having conquered the worlds of stand-up comedy, television, and film, in that order. But while he will first and foremost always be associated with humor, Eddie Murphy has done it all: romance, action, science fiction, and even serious drama. But one of his weirdest and most confusing films was in the genre of vampire horror: 1995’s Vampire in Brooklyn, which is currently streaming on HBO Max.

Vampire in Brooklyn is a film that seems to have everything going for it: a superstar at the peak level of 1990s-era Eddie Murphy, a talented supporting cast including Angela Bassett, and legendary horror director Wes Craven (who would soon go on to revitalize the genre with Scream). However, the movie is hampered by Eddie Murphy’s one great desire of the time period: to do anything except comedy. The result is a movie that technically could be called a comedy-horror, but never really at the same time and never entirely successful.

Eddie Murphy stars in Vampire in Brooklyn as Maximillian, a Caribbean vampire arriving in New York City in search of a dhampir (which is to say, a half-human, half-vampire) who can help extend his life past the next full moon. The movie opens with an impressive scene of a cargo ship full of dead sailors crashing into a Brooklyn dock in a clear homage to Dracula’s voyage to England in Bram Stoker’s novel. It is also representative of the movie as a whole that it quickly and incongruously intercuts a dramatic sequence of docks being torn apart and human corpses with a ship inspector played by comedy legend John Witherspoon doing broad reaction bits.

According to Wes Craven, Eddie Murphy was resolutely against doing anything comedic in the film, and it shows. In the 1990s, Eddie Murphy began playing against his typecast wisecracking Axel Foley image by attempting to be a leading man (Boomerang), a political satirist (The Distinguished Gentleman), and, with Vampire in Brooklyn, a supernatural villain. Reportedly, the actor was interested in playing not just a villain role, but a sympathetic, sexy one.

As such, Eddie Murphy’s scenes in the movie alternate between him seducing Angela Bassett, violently murdering people in sometimes actually frightening scenes, and him caving and giving in to some broad comedy. However, Coming to America had already made Eddie Murphy realize the potential of playing multiple roles in a movie, so Vampire in Brooklyn grinds to a halt for two excruciating long scenes in which he first plays a stereotypical Preacher exhorting a congregation into chanting “Evil is Good!” and then as an Italian-American wannabe goon shaking down a club of mafiosos.

It is very telling that the only scenes in which Eddie Murphy himself significantly performs what he is best at both involve him buried in heavy layers of makeup and essentially doing vaudeville bits. While playing Maximillian, Eddie Murphy plays an actually threatening villain who at one point lures Angela Bassett’s roommate into a tryst of sexual ecstasy that ends with her orgasms turning into tortured death shrieks while Bassett furiously paints on the fire escape, the sound muffled by a passing train. It is a genuinely disturbing scene, and most likely what Eddie Murphy himself had envisioned.

However, according to Eddie Murphy himself, the failure of Vampire in Brooklyn was due to one thing: the long wig he wore in character. Specifically, he felt that audiences simply could not tolerate seeing him with long hair and gave up on the movie as soon as he appeared in it. A hot take, to be sure, but almost everyone else in the primary cast has spoken well of the film in the years since.

Vampire in Brooklyn grossed $35 million at the box office (against a $14 million budget), which is not terrible, but definitely not what Eddie Murphy post-Beverly Hills Cop had come to expect. It was also savaged by critics and currently holds 12% on Rotten Tomatoes, though it has come to be seen as a cult classic in some corners of horror fandom.

The next year, Eddie Murphy would star in the enormously successful remake of The Nutty Professor, which cemented both his tendency to play multiple characters and his shift to family films. While he has made moves into other genres since this movie, it seems Vampire in Brooklyn was enough to scare him off making more horror films forever. Though Meet Dave comes close. 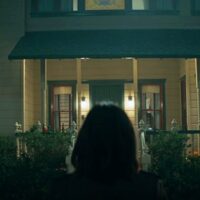