Disney Is Rebooting One Of The Best Fantasy Series Ever

A live-action Eragon television show is in the early stages of development at Disney+. The show will be adapted from Christopher Paolini’s popular young adult novels which were released in the early 2000s. The project will begin with the first book in The Inheritance Cycle series which will form a basis for the story. The author is set to serve as co-writer on the series which will be produced by Bert Salke under his Co-Lab 21 banner.

According to Variety, 20th Television is also producing the series since Salke is currently under an overall deal with Disney Television Studios. Eragon debuted as a self-published novel in 2002 before it was republished for a mass-market release a year later. Its resounding success led to a series of three more books that hit store shelves between 2005 and 2011. A movie adaptation was released in 2006. But despite having a stellar cast which included Jeremy Irons, Rachel Weisz, Joss Stone, Robert Carlyle, and John Malkovich, the film was negatively received.

But the book series still remained popular with over 41 million copies across the four novels. The Inheritance Cycle followed the adventures of a farm boy named Eragon. When he discovers a magical egg that hatches into a dragon he names the creature Saphira and the pair instantly bond. With the help of his mentor Brom, the boy becomes a Dragon Rider – an ancient order that the evil King Galbatorix had long thought to be wiped out. Eventually, Eragon and Saphira set out to defeat the villainous King and free the land of Alagaësia from his tyranny.

In 2021, fans of the books began using the hashtag #EragonRemake in an effort to convince Disney to produce a series adaptation of the story. The campaign followed the studio’s Percy Jackson and the Olympians series announcement as fans of Paolini’s books felt that his story would appeal to a similar audience. That project also has its author, Rick Riordan leading the charge as creator and showrunner. While there is a small chance that the social media movement swayed someone to consider the Eragon series, the project was probably in motion long before that.

The Eragon project will be a welcome change at Disney+ whose current line-up is dominated by Marvel and Star Wars content. To grow its audience, the streamer plans to tap into several other franchises to bolster its platform. Along with the Percy Jackson adaptation, there’s a Spiderwick Chronicles series in the works, with She-Hulk’s Kat Coiro handling directing duties on the first two episodes. This will be the second time the books by Holly Black and Tony DiTerlizzi have come to life on screen.

The previous attempt was a 2008 movie starring Freddie Highmore as twins Jared and Simon Grace. Unlike the Eragon movie, The Spiderwick Chronicles was generally well received. But some fans felt like the film didn’t do justice to the source material, according to MovieWeb. Hopefully, the series offers fans a much richer telling of the magical story that hides in the run-down Spiderwick Estate. 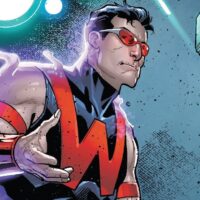