Christopher Nolan is an auteur known for his tendency to push the boundaries of filmmaking. He has long embraced the IMAX format, letting him get the biggest and most bombastic sound and picture for his acclaimed blockbusters. Now, it looks like he’s making his love for IMAX even more official as he teams up with them, Kodak, Panavision, Fotokem, and a number of cinematographers and DPs to create the next generation of IMAX film cameras.

The cameras are expected to be put into use around 2023 and will be offered alongside the digital IMAX camera offerings. Of course, Christopher Nolan himself will be much more interested in the film cameras, as he’s been a devout user of the format his entire career. Nolan prefers film over the digital format and will opt for practical effects over CG effects as often as possible. This dedication to his craft has made him one of the most successful and revered directors of our time.

Christoper Nolan isn’t the only filmmaker who will be contributing to the invention of these new cameras. Jordan Peele is also on board to consult. Peele is no stranger to pushing the boundaries of filmmaking himself, so this definitely doesn’t come as a surprise. Several cinematographers will also have input on the production of these cameras, including Rachel Morrison (Black Panther), Linus Sandgren (La La Land), Bradford Young (Arrival), Hoyte van Hoytema (Tenet), and Dan Mindel (Star Trek).

While Christopher Nolan isn’t contributing to the world of filmmaking equipment, he’s undoubtedly staying quite busy with the act of filmmaking itself. Production of his next film Oppenheimer is well underway. Of course, he’s using IMAX film cameras to do it, which comes as no surprise. Oppenheimer is Nolan’s first foray into the world of biopics.

The film, based on the book American Prometheus: The Triumph and Tragedy of J. Robert Oppenheimer, tells the story of J. Robert Oppenheimer who was a scientist that worked on the infamous Manhattan Project, which led to the creation of the atomic bomb. Upon seeing the regrettable fruits of his labor, Oppenheimer famously quoted the Bhagavad-Gita saying “Now I am become Death, the destroyer of worlds.” The film stars Cillian Murphy as Oppenheimer and Christopher Nolan handles the screenplay adaptation along with directing duties. The star-studded cast is rounded out by Florence Pugh, Matt Damon, Emily Blunt, Jack Quaid, Robert Downey Jr., Josh Hartnett, Rami Malek, and many more.

If you’ve never seen an IMAX film that was actually shot using IMAX cameras and 65mm film, you owe it to yourself to check out the experience. There’s nothing quite like seeing a blockbuster, beautifully shot film filling that massive screen. Fortunately, you won’t have to wait long for your next opportunity. The aforementioned Jordan Peele is using the format for his next film Nope, which is set to come out on July 22, 2022. For Oppenheimer, you’ll have to wait a bit longer. That movie is set to hit theaters nearly a year later on July 21, 2023. Check them out for yourself if you have an IMAX screen near you. 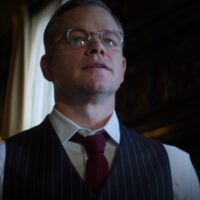