Adrien Brody: How A Racist Joke Almost Ended His Career

At 29-years-old, Adrien Brody became the youngest male actor to win the Academy Award for Best Actor in Roman Polanski’s The Pianist. His career wasn’t young, he’d began making movies 14-years prior, but Brody’s amazing performance as Wladyslaw Szpilman gave him the well-deserved award, one that should have boosted Brody’s career to new heights.

While Adrien Brody went on to work on some major blockbusters, as well as some indie favorites, Brody has been relatively out of the spotlight in recent years. What happened to the young Oscar winner and what is he up to now?

Adrien Brody’s career before his Oscar-winning role was fairly successful. The Queens-born actor built his resume by starring in films such as The Boy Who Cried Bitch, then following that up with Disney’s Angels in the Outfield. From there, Brody appeared in such notable films as in The Last Time I Committed Suicide, Six Ways To Sunday, Bullet with Tupac Shakur, the Terrence Malick war drama The Thin Red Line, and Spike Lee’s Summer of Sam, which focused on a Bronx neighborhood during the reign of the infamous “Son of Sam” killer.

Adrien Brody took on the role of Wladyslaw Szpilman in The Pianist, despite knowing Roman Polanski’s sordid history. For his role as Szpilman, the 6’1” Adrien Brody dropped 30 pounds (down to 130) to get the look Polanski wanted, and learned how to play Chopin for the part. Brody beat out over 1,400 other actors who auditioned for the role.

With his performance in The Pianist, Adrien Brody became the youngest male to win a Best Actor Oscar, beating out Richard Dreyfuss who, at 30 years of age, held that title for 25 years when he won it for The Goodbye Girl.

Adrian Brody’s Oscar win didn’t come without controversy though. When he was announced as the winner, Brody took the stage and in a very unplanned moment, grabbed presenter Halle Berry and proceeded to embrace, then plant a major kiss on Berry’s lips. “No, that was not planned. I knew nothing about it,” she said to Andy Cohen on his Watch What Happens Live show. Then she asked him, “Can I say it for real?” When he gives her the okay, Berry unloads. “I was like, ‘What the fuck is happening right now?’ That is what was going through my mind,” she said.

While Halle Berry was taken completely by surprise, the actress doesn’t hold much ill will toward Adrien Brody. “Because I was there the year before and I know the feeling of being out of your body, I just fucking went with it.” She doesn’t even recall how good the kiss was. “I don’t know, I was too focused on what the fuck was going on, I don’t even know.”

THE INTRODUCTION SEEN AROUND THE WORLD

Adrien Brody’s Berry smooch wouldn’t be all the hot water he’d find himself in. Brody’s first TV appearance came shortly after his Oscar win when he hosted Saturday Night Live. The musical guest that night was reggae artist Sean Paul and when Brody came out to introduce Paul, he came out sporting fake dreadlocks and using a Jamaican accent. The problem with this was that it was improvised, Lorne Michaels had no idea it was going to happen. It didn’t go over well with Michaels banning Brody for life from the show.

WHAT A JOKER, ALMOST SPOCK

In parts that weren’t meant to be, Adrien Brody was up for a couple of big ones. He was vastly interested in playing the Joker in Christopher Nolan’s The Dark Knight but the director, as well as Paramount, decided to roll the dice with Heath Ledger instead. Not a bad choice, looking back. Another role that Brody was keen on was in J.J. Abrams Star Trek as Spock. “I did talk to J.J. [Abrams] about that,” he told MTV. “That would have been cool. I told my parents. They got a kick out of it. ‘I may be Spock!’ Oh, well. Could have been cool.” Maybe he should have auditioned with Spock’s famous “Live long and prosper” mantra. “No. Didn’t do it. Maybe I should have. Would have had a better shot at the role,” he said.

Adrien Brody’s leading man status took him to Skull Island and the jungles of Kong. He starred in the Peter Jackson big-budget remake of King Kong as Jack Driscoll, alongside Jack Black and Naomi Watts. While the movie was slick-looking with some crazy Jackson special effects, it wasn’t the hit many thought it would be. The movie was expected to bring in $1 billion but brought in half that, which is surprising since the film received pretty solid reviews. Brody notes just how difficult filming Kong was for him. “I have never swam in air on a rope before and it is challenging, especially if you are used to a certain type of filmmaking. I remember it was very much harder than I thought. It was so hard to be great. Even though you are an essential element of the film, you are much more of a cog in a bigger wheel.”

So, why hasn’t Adrien Brody become the leading man everyone expected him to be? Brody feels his Oscar win for The Pianist led him to be typecast. “I was perceived as this very serious dramatic actor,” he said to the Independent. And this felt limiting to an actor who yearned to express himself in many different ways and who argues the purpose of being an actor is to “be as much of a chameleon as possible”.

Perhaps this is why he loves appearing in Wes Anderson movies. To date, Adrien Brody has appeared in three Wes Anderson films, The Darjeeling Limited, Fantastic Mr. Fox, and The Grand Budapest Hotel. “Wes is such a genius, a unique storyteller, you see any of his images and you say, ‘Oh that is a Wes Anderson film’, and it’s such a privilege to be welcomed into that fold. Ultimately he is one of the earliest directors that have allowed me to be funny.” “Funny” is the keyword here. Brody sees himself more in comedic roles than anything else. “It was so liberating because it is within me. I crack myself up all the time, whether I’m doing something stupid or saying something ridiculous and being able to harness that and bring laughter and lightness, that is something that I’ve always yearned to do with my work.” Maybe that, ultimately, is the reason Brody, though having a very successful career to this point, has never really been embraced as a true leading man. How he sees himself and how others wish to see him are two different things.

Adrien Brody still has the acting bug, but in the past decade or so has also moved over to a producer’s role. But producing isn’t all he wishes to do with his film career. “I’ve been producing projects and I hope that it’s inevitable one day that I direct a film. I have a lot of things I want to do.”

As far as acting goes, Adrien Brody recently finished a stint on the series Peaky Blinders and also had stepped away from the acting gig to do a little painting. “Since I took up painting, I don’t have much time for anything else. To put it into perspective, three years ago I took a two-year hiatus to not work and put aside all my other distractions.” But acting is still it for Brody. He has no less than seven projects lined up, ready to go. He just completed filming on another Wes Anderson film, The French Dispatch, so that comes as no surprise. He is also filming another TV series called Chapelwaite that comes from the mind of Stephen King. Adrien Brody may not have reached the status of true leading man but that doesn’t mean he still can’t lead a film. 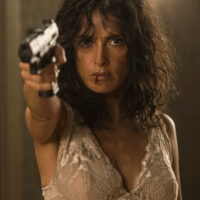