What if Doctor Strangelove created Godzilla?

You’d end up with World War Kaiju, a graphic novel in which atomic sea monsters go on a rampage.

Award-winning science fiction author Josh Finney calls his graphic novel project “a love letter to the golden age of the kaiju genre.” And what better time to launch a Kickstarter campaign to fund the project than during the intense promotional blitz for Pacific Rim? 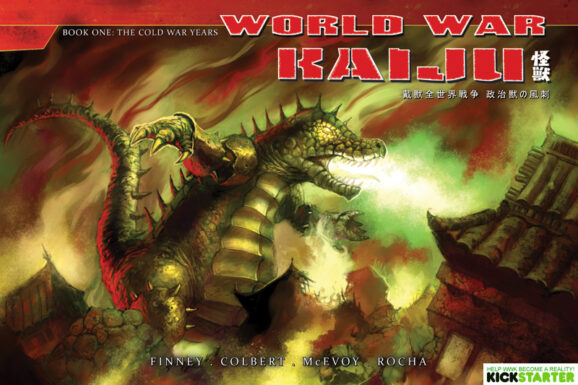 There are 31 days left to support Team Kaiju’s project. They’re looking to raise $15,000 to complete production of the art and to enhance the quality of the book’s printing. They anticipate World War Kaiju to be an 80-page widescreen graphic novel, but if they make their stretch goal of $35,000, backers will receive a 200-page hardcover edition.

The Kickstarter campaign is going well so far — unsurprisingly, people are interested in reading a graphic novel that tells the story of an alternate history in which the atom bomb was never created. That all sounds pretty good, right? But if there’s no atom bomb, what’s the most destructive force on earth? The Kaiju, towering a 50 feet tall. And, as you probably guessed, they’re radioactive. Instead of assembling an army of Jaegers to fight the Kaiju, World War Kaiju’s hero is a retired CIA operative who uncovers a conspiracy surrounding the sea monsters. 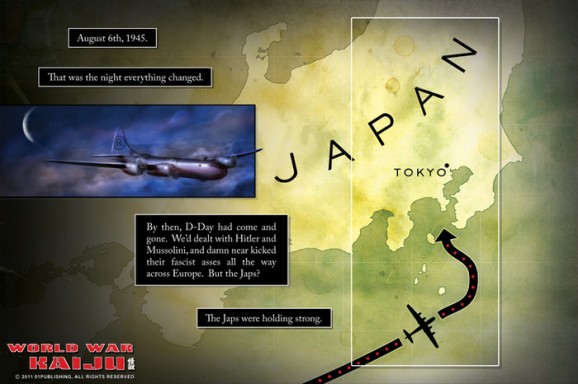 The graphic novel pursues questions of whether the Kaiju War was designed and perpetrated intentionally, how exactly the KAI-235 isotope spawned the sea beasts, and how long the government can keep the monsters a secret. World War Kaiju “looks back to an era when the world loved atomic monsters, but feared the atomic bomb, and warps history in ways that only men in rubber suits can.”

Fantasy artist Patrick McEvoy brings the Kaiju to life with incredible renderings. You may have come across his work, as he’s spent years illustrating Lovecraft-inspired art, including books, games, comics, posters, and t-shirts. He’s best known for his work on the Arkham Horror board game, the Call of Cthulhu
card game, and Fantasy Flight’s Game of Thrones card game.

The art goes beyond the pages of the book — some of the incentives for backing the Kickstarter campaign are Kaiju-themed propaganda posters, postcards, and pamphlets. 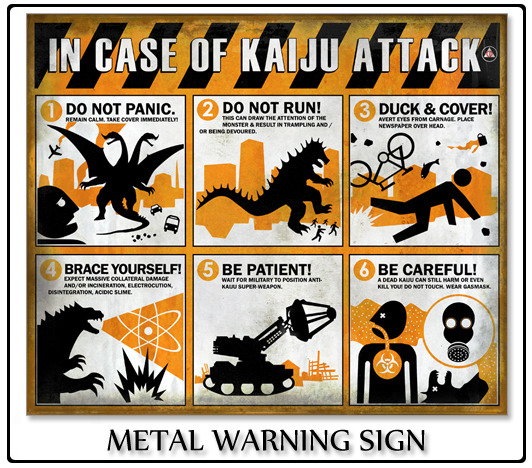 Finney’s received some creative input from Michael Colbert, who worked as a gaffer on Babylon 5, Torchwood, and True Blood. He also writes comics, including the cyberpunk action tale Crazy Mary. Kat Rocha, a long-time collaborator with Finney, rounds out Team Kaiju, editing and helping to conceptualize characters for the book.

Supporting World War Kaiju seems like a no-brainer. Who wouldn’t want to see radioactive sea monsters rampage while the government tries to cover it up? Isn’t this pretty much what happened during the 1940s anyway? Supporting the project isn’t without risk, though. Team Kaiju admits the possibility that Patrick McEvoy could be devoured by the kaiju he’s working with, and “if that were to happen, the process of resurrecting his corpse by way of alien cybernetics could take time.” Perhaps that’s another Kickstarter campaign for another time. 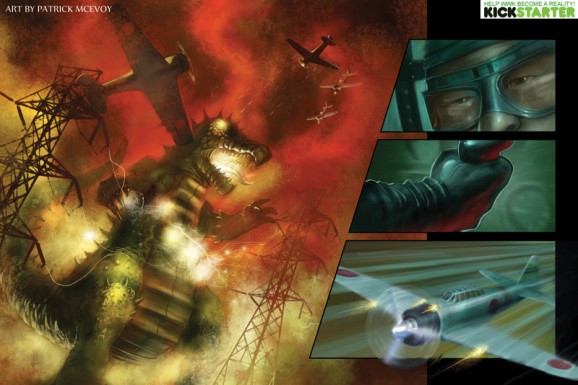