While I’m not a big NFL football fan, I can recognize talent and some pretty sweet kicks. Detroit Lions wide receiver Calvin Johnson released his own pair of Nike sneakers that marries his uncanny athletic ability with his on-field nickname “Megatron.” Nike released a pair of limited-edition Calvin Johnson Megatron cross-trainers and sneakers that are perfect for Lions fans and Transformers fans alike.

If you’re a sneakerhead, then you’re going to love these new shoes from Nike. Taking a page from Generation 1 Transformers, the Megatron Nike Air Trainer SC II and Megatron Trainer Max have deep purples with strong hints of black and red. The shoe’s heel sports the classic Decepticon logo. The shoes even have Johnson’s favorite Megatron quote — “Show no mercy” — on its footstraps.

The Nike Megatron Elite TD Cleats are my favorite from the collection. The shoes are purple and silver with hints of red, just like the Decepticon leader from season one of the original Transformers animated series. Even the Megatrons’ shoeboxes are pretty sweet! Each box comes in the shape of the All-Spark and “transforms” to unlock Calvin Johnson’s Nike Megatrons. Packaged with each pair is a classic Megatron action figure with tiny purple football that Johnson and Hasbro designed in a partnership with Nike.

Designed to amplify Johnson’s powerhouse athletic ability when training in the gym and on the turf, the Nike CJ81 Megatron Trainer Max features adaptive traction, lockdown support, and Max Air cushioning. In true MEGATRON form, all core attributes of the shoe are energized in a design that marries Johnson’s on-field persona with his human side.

Calvin Johnson got the nickname Megatron from his former teammate Roy Williams because of Johnson’s larger-than-life stature on the football field. The nickname stuck with Detroit Lions fans, who have been calling him Megatron ever since. You can buy the three-in-one “Megatron Rise” set from Nike.com. Act fast; these shoes are very limited edition and retail for $550 for the entire set. Just in time for Christmas!

As for the new movie Transformers: Age of Extinction, ComicBookMovie reports that images of a hoodie that was given to all the costume crewmembers during production of the new film have surfaced on the Internet. The images shows off a silhouette of what is believed to be the Dinobot Grimlock, in upright robot form. Grimlock appears to be holding a giant mace-like weapon in one hand and a giant ball-spike in the other. You can also see where the robotic T-Rex’s head will split to make the robot’s shoulders and the end of his tail to make up Grimlock’s feet. You know Grimlock’s going to be kicking some major ass just by looking at the Dinobot’s silhouette. “Me Grimlock look in robot mode!” Transformers: Age of Extinction will take place four years after the epic events of Dark of the Moon. It’s rumored that the film’s new villain will be Galvatron (the resurrected Megatron) and the planet-sized Transformer Unicron. 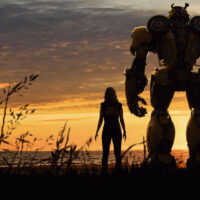