Say, hypothetically, that you’re someone with a lot of pull when it comes to official government decisions, and the country is about to endure the biggest attack it’s ever faced. What’s your first move? How do you go about planning a possible retaliation? If your answer is “dedicate someone to create a specific set of identical outfits for your non-military human protagonists,” then you may or may not have had a part in writing the script for Chris Columbus’ Pixels, the upcoming comedy adventure from Columbia Pictures and Happy Madison Productions. As you can tell from the film’s first image, seen above, fighting in street clothes is bullshit.

The film’s first still appears in this week’s issue of Entertainment Weekly, and features four of Pixels‘s marquee actors—Adam Sandler, Peter Dinklage, Michelle Monaghan, and Josh Gad—walking away from what appears to be a Wiz Khalifa concert, or maybe it’s just a post-explosion fire. In any case, nobody is too worried about the situation. Sandler looks like he just walked off the set of Galaxy Quest 2, while Gad and Monaghan act like the flight attendant look fairly normal. As it usually goes, the main guy worth looking at here in Dinklage, who is rocking a fly head of hair with his fingerless gloves, and looks like a WWE character waiting to happen.

Pixels is based on an excellent short film created by Patrick Jean (who is executive producing), and its major threat comes after a group of aliens watch footage of 1980s arcade games like Space Invaders, wrongly assuming everything is news footage. Or something like that. In any case, the aliens plan to attack New York City in classic video game style, and President Will Cooper (Kevin James) calls up his childhood friend and video game champion (Sandler) to lead a button-tapping resistance. Gad and Dinklage join him as two outspoken gamers whose social skills leave much to be desired. Monaghan plays Sandler’s main love interest. The cast also includes Brian Cox and Jane Krakowski, who was added to the cast just last week.

Take a look at Jean’s short film below, and tell me it doesn’t immediately make you want to run out to a retro arcade.

Written by Timothy Downling (This Means War) and Tim Herlihy (Grown Ups 2), Pixels will float like a centipede and sting like an Atari when it hits theaters on May 15, 2015. That’s right, you can look forward to ten more months of Pixels promotion. You’re welcome. 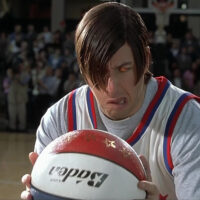