Guardians Of The Galaxy Toys May Reveal A Hidden Secret READ WITH CAUTION. POSSIBLE SPOILERS BELOW

The Transformers films provide the perfect example of why looking at a toy line is the best way to sniff out movie spoilers. Earlier this year, leaked Hasbro memos to Toys R’ Us revealed that the Dinobots will indeed appear in Transformers: Age of Extinction, the fourth installment. Now it seems like Marvel’s Guardians of the Galaxy toys may have revealed an appearance from of one of The Avengers.

According to Collider, Hasbro, the manufacturer behind Marvel’s action figures, leaked product information, such as SKU numbers and descriptions. Some of Guardians of the Galaxy’s product info includes which characters will fight other characters in the movie, like Star-Lord fighting Gamora (GGM STAR LORD VS GAMORA A7899). The surprise is that the leak also revealed an Iron Man toy (GGM IRON MAN A7909) as part of the line. Does this mean Iron Man will be in the new cosmic comic book movie?

The article points out that Robert Downey Jr.’s contract with Marvel only includes appearances in The Avengers: Age of Ultron and The Avengers 3, so it’s unlikely that he would appear in Guardians, even in a post-credits sequence. However, if Iron Man 3 taught us anything, it is that Tony Stark doesn’t have to be in the Iron Man suit for Iron Man to make an appearance. An Iron Man suit powered by J.A.R.V.I.S. could easily appear without having Downey committing to another film.

Like all rumors, please take this with a grain of salt. Collider also points out that a product in a film’s toy line doesn’t necessarily mean that said character will appear in said film. Although Iron Patriot was in the film, War Machine and the Deep Space Suit weren’t but still appeared on toy shelves as part of the Iron Man 3 collection.

Meanwhile, Marvel president Kevin Feige talked about introducing the Guardians of the Galaxy to a general audience who don’t know much (if anything) about them. While its members like Rocket Raccoon, Drax The Destroyer, and Groot are strange, this isn’t the first time the studios has to introduce weird characters and an offbeat mythology to an unknowing public. In 2008, Iron Man was not a household name, but looking at how far the character has come over the last five years, and you can see that they did a great job with the very early stages of the Marvel Cinematic Universe.

Guardians of the Galaxy, we just finished filming that like a week ago. It is really a very special movie for us at Marvel. We love those characters, we believe in that storyline. Nobody’s ever heard of it, which is in some ways liberating. The way many people had never heard of Iron Man before the first Iron Man movie. So we’re excited to find ourselves sort in the same creative state of mind we were on Iron Man 1. Which is to say : ‘How do we best introduce those characters that most people don’t know, and bring them to a big audience ?’ What James Gunn has done, both in his script and directing the cast… The cast that has been assembled is one that we’re very proud of.

It’s clear Marvel knows what they’re doing when it comes to comic book movies, and almost every movie studio out there is trying to copy their formula. Placing characters in a shared universe seems to be the current trend in Hollywood with Warner Bros/DC Comics making Man of Steel: Superman Vs. Batman, Twentieth Century Fox making X-Men: Days of Future Past and combining all the mutants from every X-Men movie in one super-movie, and Sony Pictures possibly introducing the Sinister Six into the Spider-Man movies. At the moment, however, Marvel is the only one having success. 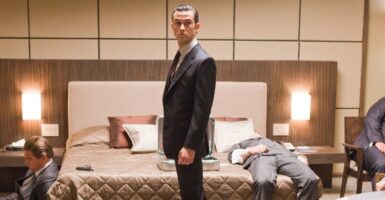