Give Yourself A Walking Dead Zombie Makeover With New App

Here’s a conversation from the future. “I was on my way to work in my Walking Dead-mobile when I looked down and saw I had a stain on my Walking Dead tie from the Walking Dead macaroni and cheese I made for Walking Dead lunch. Can you believe that “Sinewy Artichoke” is still the only flavor they have?” And the response: “Sir, you paid your toll five minutes ago. Please keep driving.”

The latest licensed product to feed on fans’ brains is the Dead Yourself website and mobile app from AMC. Sure, there are many other apps and sites that do the exact same thing, but these have the name of the show at the bottom, and I’d hope everything was designed by someone involved with the show.

From the press release:

Tune-in each week for new episodes of “The Walking Dead,” and catch new releases of “Dead Yourself” eyes, mouths, or props. And don’t forget to vote for the most fearsome, the most gruesome, or the most awesome photos in the Walker Photo Gallery!

And here’s the fruit of two minutes of labor from my iPhone. 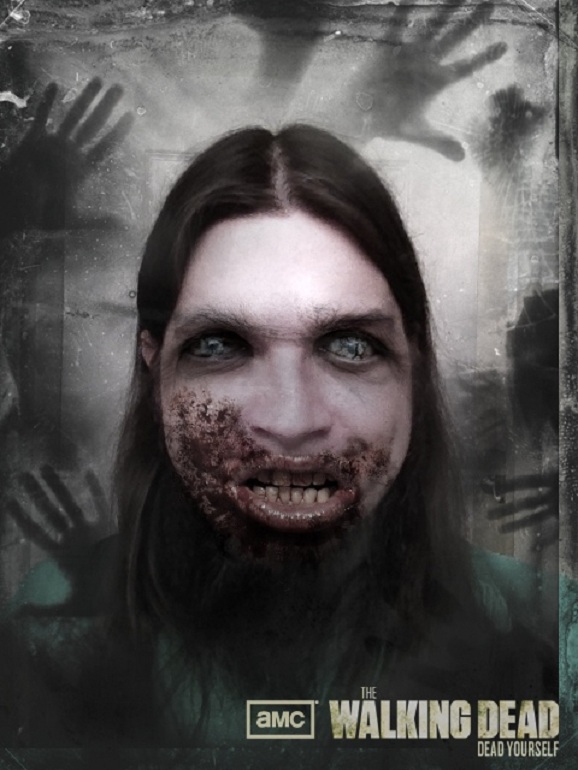 Considering they announced Dead Yourself over a month ago, I thought there would be more to this thing, even though it’s still pleasing. Once you take or upload a pic, you get 14 different pairs of eyes to choose from, 11 mouths, and 14 object or setting options. Like, you can wear a collar or be behind bars, for example. That said, each of the options is well crafted, and makes for an interesting combination of images, especially if the picture you took was interesting. You can finalize the image with different picture tones and send it out into the Internet for other people to say, “Hey, mine kinda looks like that too.” But whatever you do, get your ass in front of a TV on February 10th when the show returns for Sunday Bloody Sundays.