Booster Gold Could Be the Key
But how do you even introduce this concept of a multiverse? Well, The Flash is already dabbling in concepts of time travel and fluctuating realities, so that could give you the perfect “in.” But there’s actually one other character who could prove the catalyst to truly doing the concept justice: Booster Gold. He was introduced back in the mid ’80s as a goofy fuck-up from the future who traveled back in time, faked being a superhero, and basically just wanted to be famous. I’m more interested in the version of Booster we saw in Geoff Johns’ ongoing series prior to DC’s “New 52” reboot. There his reputation as a loser was actually a cover for his real job as essentially a time agent, policing the timestream with fellow time traveler Rip Hunter (his grown-up son, unbeknownst to Booster). He’s living an epic life, saving reality behind the scenes on a regular basis, and most of the time the other heroes never ever know. Want a perfect excuse to facilitate crossovers between shows and networks? I give you Booster freaking Gold.

Even better, there’s already precedent for this. See, some years back, Arrow/Flash/Supergirl executive producer Greg Berlanti tried to get a Booster Gold series up and running at Syfy. It never went anywhere, but they did complete a script. Moreover, Geoff Johns has said there are no rights issues surrounding Booster, and even teased the possibility of the character being introduced on The Flash. That’s a brilliant idea, because Booster is a character that would work really well in the world of The Flash, but let’s think bigger. Given the success of The Flash and Arrow, The CW is already open to more spinoffs, so why not introduce Booster with an eye to getting his own show? I’m envisioning a crazy perfect world where a Booster series could steal a page from Back to the Future and have Booster mucking about behind the scenes and just around the corner from the other DC shows and movies. One week he visits Gotham to save Jim Gordon from an assassin’s bullet he’d never see coming. The next he turns up in a Justice League movie to warn of some threat that imperils every universe. It’s probably a pipe dream, but it has the potential to be something truly epic, and very different from what Marvel is creating. 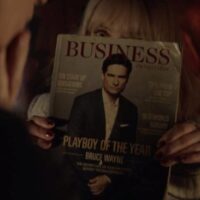