2014 marks the 30th anniversary of one of our all-time favorite movies, Ivan Reitman’s Ghostbusters. While the main core of the group of beige jumpsuit wearing paranormal investigators is made up of four members, there’s a definite imbalance. Venkmen (Bill Murray), Egon (Harold Ramis), and Ray (Dan Aykroyd) are the primary focus, and while he plays an important role (especially in Ghostbusters 2), Ernie Hudson’s Winston Zeddmore gets the short end of the stick. Originally there was more to his character, and actor is still a little bitter about that.

In the special reunion issue of Entertainment Weekly, Hudson was invited to contribute and article, and what he wrote is truly revelatory. He thought his part was going to be something entirely different, and be a kind of career-making role, only to have it changed drastically in rewrites, leaving only what-ifs and lingering feelings of resentment.

Hudson went through an arduous, months-long audition process for the part that he says he really, really wanted. In early drafts of the script, Winston was supposed to be there from near the beginning, with fully fleshed out back story, something the character in the film certainly does not have—he was supposed to be a demolitions expert and some kind of former military man. But all that went away in short order. He says:

The night before filming begins, however, I get this new script and it was shocking. The character was gone. Instead of coming in at the very beginning of the movie, like page 8, the character came in on page 68 after the Ghostbusters were established. His elaborate background was all gone, replaced by me walking in and saying, “If there’s a steady paycheck in it, I’ll believe anything you say.” So that was pretty devastating.

That has to be a kick in the nuts, to think you have this important, in depth role, only to have the chair yanked out from under you as you sit down. Part of the reason given for this is because the studio wanted Murray to have more space to riff and do his thing. And it’s hard to fault that logic, it’s some of his most memorable work, but as a single father struggling to make a living as an actor, like Hudson was, that obviously still stings. Even though Winston is often cited as the “soul” of the team, and the “everyman” who bridges the gap between these scientific types and the audience, he’s kind of disposable, even left off the original posters. Understandably, Hudson has a complicated, what he calls a love/hate relationship with Ghostbusters. He says, “I love the character and he’s got some great lines, but I felt the guy was just kind of there. I love the movie, I love the guys. I’m very thankful to Ivan for casting me. I’m very thankful that fans appreciate the Winston character. But it’s always been very frustrating.”

He credits his experiences on the film teaching him some hard lessons about working in Hollywood and how to keep pushing on through even when things don’t go your way. As he says, he though Ghostbusters was going to “kickstart my career into high gear,” but he concludes with:

I certainly am thankful to have been a part of it. I love being an actor. I still enjoy the process. I’m still hoping that I’m going to get that one great role that I thought I had in the original Ghostbusters. 30 years later, I’m still looking.

This article is an interesting read, and definitely offers a different perspective on the film, and the entertainment industry in a larger sense, than you usually come across. 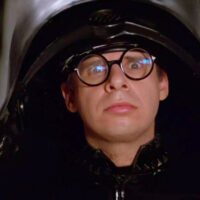