Have you ever been engaged in some dull or repetitive task and thought, “I’d love a robot to do this for me?” If so, you might be able to make your vision a reality. The world’s first start-up competition for robotics is underway, and is accepting entries until March 30.

Robot Launch 2014 is looking for ideas for robot start-ups. They want business models, prototypes, and just plain old great ideas. If you’re wondering what exactly constitutes a robot start-up, their definition is pretty broad. We could be talking about some kind of conventional robot, an appliance, some other connected device, a sensor, an actuator, artificial intelligence — you get the picture.

The prizes are about as varied as the eligible entries. The People’s Choice award will be given to the start-up that Robohub readers like best, and that also comes with a $500 prize. The other awards involve prizes such as mentoring, design reviews, professional consultations, and start-up services that include showcases, press, and legal services. Round one opened on February 20 and closes at midnight PST on March 30. It involves an application and the option of making a 60-second video. Entrants can update their applications any time before March 30, and the earlier one submits, the more press they have for their abstract and team bio, which may be helpful later on. The entries will be judged and whittled down to 30 during the first week of April, at which point the 30 remaining contenders will have to update their applications and submit a two-minute video pitch. The finalists will be announced at the end of April, and the award winners will be announced toward the end of May. The top three finalists will get a showcase at the Solid hardware and software conference, and the finals will be aired online.

The contest was organized by Andra Keay of Silicon Valley Robotics, who hopes the competition will give a boost to robotics startups that are still in their earliest phases. Getting from “prototype to product very quickly” is a widely-shared goal in the industry, and the prizes are designed to do exactly that. So far, more than 40 entries have been submitted from 18 different countries, including the U.S., Australia, India, Mexico, and France.

One interesting aspect of the competition is the participation of law firms such as WilmerHale, which have taken a sharp interest in robotics given the number of emerging start-ups that need legal advice and representation. Won’t it be ironic when robots replace lawyers? 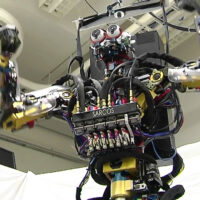 The Navy Is Building Half-Humanoid Robots