Red Planet Race: Who Will Land A Human On Mars First?

The original NASA astronauts thought their moon missions would lead to landing a man on Mars. It never happened. While once space, the final frontier captured the public imagination, the space race slowed and left us trapped inside Earth’s atmospheric bubble. For too long it seemed we’d never get back into space, but now that’s changed and plans are underway to put a human not just back on the Moon, but on Mars too.

Now various private companies, those headed by absurdly rich enthusiasts, have joined governments and space agencies on a quest to take humanity to Mars. While the question of who will land on Mars first looms large, there is no shortage of interested parties and no question people are pushing that direction.

Will we get to Mars? You can bet on it. Literally in this case. A number of bookies have set odds about who will reach the Red Planet first. (What did Han Solo tell us about the odds?)

Who are the key players in this race to Mars? What are their plans? How far along are they? And who will land on Mars first? We have answers.

Tesla and PayPal founder Elon Musk has long been fascinated with space and the exploration thereof. So much so he started SpaceX in 2002 for the express purposes of making space travel affordable and accessible and for colonizing Mars. With billions of dollars in resources behind their efforts, SpaceX has been building the infrastructure and doing the leg work since its inception. This includes developing various types of spacecraft, pioneering the use of new, alternative fuel sources, and drafting ambitious plans. Just this past August, their prototype “Starhopper,” a craft they hope will be able to take passengers deep into the solar system, had its most successful test. While many competitors view this as a much longer-term effort, they have an eye on the next few decades. The ultimate goal is to have a permanent colony up and running by 2050, with an eye on it becoming self-sustaining, possibly even terraforming the planet and transforming the atmosphere.

Elon Musk isn’t the only wealthy entrepreneur with an eye for space travel and putting boots on Mars. Amazon founder Jeff Bezos has his own celestial ambitions, founding Blue Origin in 2000. Similar to SpaceX, one of the goals was to lower the cost of space travel and make it more widely accessible. Blue Origin’s stated purpose is to “build a road to space.”

To achieve these goals, they’re developing reusable craft like New Shepard, designed for sub-orbital space flight, and New Glenn, intended for excursions deeper into the unknown. They’re also hopeful of partnering with NASA. Before Mars, Blue Origin has its sights set on the Moon, aiming to mine lunar resources and even found a colony. Mars, however, is part of their long-term plans. And with Bezos resources driving the project, it seems they have as good a chance as any other interested party.

You can watch the entire December 11 launch and landing below…

Boeing Putting An Astronaut On Mars

A few years ago, Dennis Muilenburg, CEO of airplane giant Boeing, declared his company would beat SpaceX to Mars. He said, “Eventually we’re going to go to Mars, and I firmly believe the first person that sets foot on Mars will get there on a Boeing rocket.” How do they plan to accomplish this feat? Boeing teamed with NASA to develop their Space Launch System, designed to carry people and payloads to moon and, ultimately, Mars. With their resources, infrastructure, and partnership with NASA, Boeing certainly appears to have the necessary oomph behind their endeavors. That said, according to their website, they envision a Mars arrival by 2035. While that’s a human landing, not necessarily a colony or anything permanent, that target seems ambitious.

Boeing takes a huge step forward towards getting boots in space on December 20, 2019 when they launched their Starliner capsule on its first orbital test flight to the International Space Station. Watch the launch happen below…

The launch, which happened at 6:36am, was successful. However, orbital insertion for the Starliner was not. The capsule ended up in an “off-nominal” orbit, leaving Boeing scrambling to adjust their plans.

The idea behind Starliner is to use it as a way to shuttle astronauts back and forth from Earth to the ISS. It’s in direct competition with the SpaceX Dragon capsule, which is vying for the same job.

This new Starliner launch happens at exactly 3:36 PT, lifting off from Cape Canaveral in Florida. It takes the vehicle 31 minutes to reach orbit and it doesn’t actually arrive at the ISS until December 21st. This launch is unmanned and carries supplies only. If it goes well, it will be one of the last steps towards using their next launch to carry actual astronauts.

If we’re talking about space exploration and missions to Mars, we can’t neglect to include NASA. Not only are they the OG when it comes to this sort of endeavor, they’re the ones who have had the most success in that realm thus far. They’ve put four rovers—Sojourner, Opportunity, Spirit, and Curiosity—on the Martian surface to explore, study, and take samples of the soil, atmosphere, and environment. As they continue to develop their Space Launch System, they certainly have aims on continued excursions to space. Next up is sending a rover to the Moon in 2022 to look for water, with a tentative date for a manned mission in 2024 with their Artemis program. While they definitely have an eye on Mars beyond that, they may be in for an uphill battle. A government agency, dependent on government money for these pricy endeavors, they continue to face down questions about their future funding.

Space Force…doesn’t exist. It’s hard even to add “yet” to the end of that statement because who knows if it will ever actually become a reality. On June 18, 2018 President Trump directed the Pentagon to begin forming a sixth military branch called “Space Force”. It’s goal is to undertake missions for the United States of America in the rapidly evolving world beyond Earth’s atmosphere. So far though, the Pentagon has only formed “Space Command”, which is described as a precursor to the Space Force.

Getting to Mars might be difficult for an entity that exists in name only. That said, they do have the most sci-fi sounding name of all the potential parties, so, there’s that.

Russia Putting A Man On Mars

Never ones to be left out of a good space race, Russia still looks like a serious player in the quest to reach Mars. The first to put a person in space, the Soviets launched a series of probes at the Red Planet in the 1960s. In 2011, they launched Fobos-Grunt, an attempt to reach the moons of Mars and collect samples. Though the craft failed leave low-Earth orbit, they’ve had their eyes on Mars since the earliest days of space exploration. (Can we still make “Red” Planet jokes even after the fall of the U.S.S.R.?) Russia is currently working with the European-led ExoMars project to launch a rover and stationary lander to Mars in 2020, though there have been recent setbacks. This rover will have the capability to dig deeper than current models and will look for organic matter radiation and wind might not have penetrated deep enough to destroy. Though a human mission still seems far off in the future, there’s definite interest and the willingness to reach out into the solar system.

Despite being the most populous country on the planet, China didn’t launch its first manned space flight until 2003. Though they traditionally lagged behind the U.S. and Russia in the space race, they’re making up for it now. As it has grown economically and in influence on the world stage, the Chinese space program has followed suit. Now they’ve become a major player, spending tons of cash and formulating their own ambitious plans. Just this year, they landed the first probe on the far side of the Moon. They intend to launch a manned space station by 2022, and even have eyes on a permanent research stations on the Moon. With such a push, it only makes sense they also have their eyes on Mars. In 2020, China plans to launch the Mars Global Remote Sensing Orbiter and Small Rover in an effort to search for signs of life, either existing or previous, and to evaluate the planet’s environment. There don’t appear to be any plans to send people to Mars yet, but yet feels like the key word there.

One of the most ambitious plans for the Red Planet belongs to the United Arab Emirates. Not only to they intend to reach Mars, their stated goal is to have a human settlement of 600,000 by 2117. Those are lofty ambitions for sure, but the UAE looks to be putting its money where its mouth is. They’re one of the top nine spenders when it comes to space sciences and technology, investing in research in artificial intelligence, robotics, and other related areas. In 2020, the UAE is set to launch Hope Mars Mission, a probe that will study the climate, weather, and geography of the planet. Back on Earth, they’ll also be plenty busy building the Mars Scientific City, a 1.9 million square foot facility designed to simulate the Martian surface and environment, where a team of scientists will live for a year. This practice run could be ready to roll in less than four years.

Who Gets to Mars First?

All of the Mars hopefuls have certain things going for them. SpaceX and Blue Origin have two of the richest people alive writing checks. NASA and Russia have the track record when it comes to space exploration. China has a wealth of resources, people, and drive. And with money and grand ambitions, the UAE might just pull it off. From different perspectives, one plan seems as plausible as the next. (You can also put money on Space Force, which doesn’t exist, so…)

Right now, you’d be smart to go with the betting line which predicts say SpaceX will be first to put a human on Mars. That said, NASA, if they keep their funding, probably has the best chance to land on Mars. Or China, continuing with their massive spending on research and ambitious planning. It’s also possible one or more of these entities teams up, pools their resources, and we see a joint venture.

Still, there’s something about an obsessed, entitled rich guy with nearly unlimited funds, the willingness to foot the bill, and reckless abandon. That screams to me Elon Musk will get to Mars first. Expect to see him in orbit soon, alongside the Tesla Roadster he sent ahead on a scouting mission in 2018. 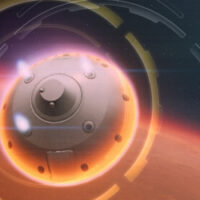 Land The Curiosity Rover On Mars Right Now With Your Xbox 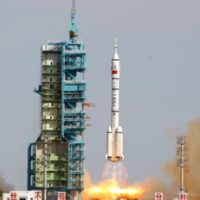 Mars Rover May Contaminate The Red Planet With Earth Life