Drop Your Kid Gloves for This Functional Iron Man Gauntlet

You don’t have to be a superhero to want to live like a superhero. Toy manufacturers have long since dug their hooks into the psyches of children aiming to ape their favorite characters. The giant fists that came out when both of the Hulk movies were released? Those things were responsible for minutes of fun and enjoyment. I had the plastic Batman utility belt as a kid, and my innovation to it was replacing a lost Batarang with a “Non-bat-shaped thing that doesn’t ever come back” creation of my own.

Laser gadgeteer Patrick Priebe runs Laser Gadgets and is responsible for some really cool shit, like working representations of the Gauss gun from the Fallout series, as well as wrist-bows and flame-gloves. His latest creation is Tony Stark-raving genius: a working Iron Man Gauntlet. Granted, they’re nowhere near as destructive, and we wouldn’t recommend trying to take on The Mandarin or anything. But the laser does get hot enough to pop a balloon, so maybe you could surprise the shit out of Justin Hammer before using a real weapon to take him down. Check out the mostly wordless video below to see how other people spend their spare time. For that extra bit of flair, do as I did and picture him hovering in mid-air using a pair of jet boots, the existence of which hasn’t been shared with anyone yet.

For function’s sake, they’re not going to replace your Isotones for handwear, or your machete for popping balloons, but it’s a defining success as far as high-tech DIY superhero gear. I mean, it’s no bedspread cape or anything. Now I just need to get a hold of one of Priebe’s Laser Revolvers so I can finally make that James Bond in the 25th Century mash-up I’ve been dreaming about. 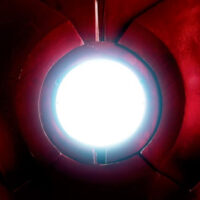