The Wonder Twins has been canceled as part of the cost-cutting strategy on the part of Warner Bros and is no longer in the future of DC films.

When Warner Bros. and Discovery merged, incoming CEO David Zaslav made a pledge to cut nearly $3 billion in costs. Nothing was safe, as evidenced by the $90 million hit the newly merged company took when it dropped Batgirl from its theatrical release. But other things had to go. Zaslav was making cuts left and right and one picture that was squarely in his sights was The Wonder Twins.

One source said it was canceled because the film’s budget had hit $75 million. Another source said that the way the film was being conceived made it “too niche” of a project. We are going to go with “cost” as to why Zaslav canceled the production.

Zaslav’s desire is to see HBO Max original movies with a $35 million or less budget. He also has a mandate that any DC film should be made with a goal of a theatrical release and spending $75 million on a project heading straight for HBO Max simply doesn’t make financial sense to him. So, with films dropping left and right from the Warner-Discovery calendar, let’s see what we were going to get with The Wonder Twins and what we are now missing with the film going away.

A pair of twins named Zan and Jayna, they are similar to Superman and Martian Manhunter in that they are visitors from a distant planet who fight for the powers of good on Earth. However, rather than being vulnerable or having the ability to read minds, Zak and Jayna can only use their individual powers of shapeshifting when they actually physically touch and say the words “Wonder Twin powers, activate!”

They also have a pet blue space-monkey named Gleek, who has an enormously strong prehensile tail and can act as a bridge to allow the twins to touch when they are physically out of contact. That last part seems weird, but we are dealing with an intelligent blue primate from another planet, so maybe we should reserve judgment.

THE WONDER TWINS CAME FROM EXXOR

In most versions of the incredibly convoluted continuity of DC Comics, The Wonder Twins come from a world called Exxor. While their backstories have changed over the years (as is standard practice for DC), the general idea is that they are orphans who have escaped from the thrall of an alien overlord and seek refuge on Earth.

But outside of DC Comics, The Wonder Twins first appeared on The All-New Super Friends Hour, a popular ABC cartoon show in the 1970s. They were actually intended as replacements for a similar pair of characters named Wendy and Marvin, who were supposed to be points of relation for the audience of watching children.

However, the writers of the show quickly realized a show about superheroes would probably do better with more superheroes rather than less, and Wendy and Marvin were replaced with The Wonder Twins.

It’s also worth mentioning that The Wonder Twins were heavily based on the popular brother-sister musical duo Donny and Marie Osmond, who also had a show on ABC at the time. That explains a lot about their very dated look and the goofiness of their powers (and Gleek), given that they were characters on a children’s show based on actors on another children’s show.

Eventually, The Wonder Twins were introduced in Superfriends Comics, and became part of the ongoing DC Comics continuity in the 1990s.

ADAM SZTYKIEL HAD BEEN SLATED TO DIRECT

And now back to the canceled Wonder Twins HBO Max movie. It was set to be written and directed by Adam Sztykiel, the screenwriter of Dwayne Johnson’s imminent Black Adam film. Sztykiel has been writing films since the 2000s, beginning with 2008’s Made of Honor, a movie that dared to ask “what if a man was a bridesmaid, and that man was Patrick Dempsey?”

Since then, he created the show Undateable, has already worked with Johnson by co-writing and acting in the massively successful, incredibly forgettable movie Rampage, and is set to write a sequel to the comedy hit We’re the Millers and a movie called Spy Guys rumored to star Shazam star Zachary Levi. The Wonder Twins will be Sztykiel’s directorial debut.

When The Wonder Twins film was announced by Warner Bros. in February, they did so without giving much detail. There was no actual plot other than the film would follow Zan, Jayna, and Gleek. As they were part of the 1977 Hanna-Barbera All-New Super Friends Hour, there was no mention if any of their “Super Friends” friends would be appearing in the film. We did, though, finally get a couple of pieces of key information about the film before it was unceremoniously kicked to the curb.

Now that the film has been officially canceled, we can tell you that the project had already lined up KJ Apa (Riverdale) as Zan and Isabel May (1883) as Jayna.

THE WONDER TWINS APPEARED IN THE LEGO BATMAN MOVIE

Surprisingly, yes. Although Zan and Jayna became shorthand for the kind of child-centric portrayal of comic books epitomized by Superfriends, they have had a shockingly strong presence in all aspects of DC lore. They have already appeared briefly in The Lego Batman Movie starring the voice talents of Will Arnett, and Teen Titans Go! To the Movies. Given both of those skew heavily towards the family-friendly aspects of DC, it is unlikely that this upcoming Wonder Twins movie will be a Snyder-style grim and gritty reboot.

The Wonder Twins have had a much stronger presence in television. Aside from Superfriends, they have appeared on the WB/CW show Smallville, with Zan portrayed by David Gallagher and Jayna by Allison Scagliotti. They also appeared on the Justice League Cartoon Network show, and on Teen Titans Go!, this time voiced by Khary Payton and Tara Strong. Pretty good longevity for a pair of Osmond knockoffs.

THE WONDER TWINS IS FULLY CANCELED

At this point, the plot of the now-canceled The Wonder Twins movie is still unknown. We do not know if there were any intentions of it being an origin story or if they would have been already established on Earth. Chances are because so many knew so little about The Wonder Twins, it would be a little of both.

Another unknown was the flavor of the film. Was it going to be a lighthearted take on the DC mythos to contrast with some of the residual grimness of The Batman and the ultraviolence of Peacemaker? It would have been interesting to see what direction they were going with the film.

Who knows? Maybe Zaslav’s edict to cut costs will allow for the film’s budget to drop and give them another shot at it. Unfortunately, there may not be a big enough audience to warrant a theatrical release and with Zaslav saying DC films will only be released in movie theaters, it doesn’t appear that we’ll be seeing The Wonder Twins any time soon, if ever. 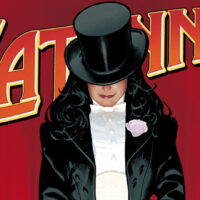