The Terminator franchise has never really been able to shake itself from the legacy of the first two films. Every successive sequel has failed to take off and do something interesting with the series. Still, that has not stopped the people behind the property from forging ahead. And if a new report is to be believed, it sounds like the series is going to be going back to its roots in a very specific way.

Insider Daniel Richtman reports that the next Terminator film “will be straight horror.” That sounds kind of shocking considering the majority of the franchise would be categorized as sci-fi/action. However, if this rumor is true, it sounds like the series could be looking at the original film for inspiration. The Terminator was more focused on the horror of its premise than any of the other sequels. Could the series look to that for a new direction?

It sounds like the best possible thing to do with the franchise at this point. The Terminator was essentially a sci-fi riff on a slasher movie. After Terminator 2: Judgment Day upped the ante and set an action standard for the series, no other entry really tried to go back and recapture that horror influence that the original film established. If this new entry decides to go that route, we could see something along the lines of the excellent Halloween (2018). What is a Terminator but a robot Michael Myers?

Whatever direction the series takes, it seems pretty clear that all the post-Terminator 2 movies have failed to capture the imagination and interest of audiences. Maybe injecting a horror movie sensibility could energize a new generation of fans to get interested in the series. But, is that going to be enough for the franchise to regenerate and find new life in this century?

And what about the series’ star, Arnold Schwarzenegger? Richtman claims that Arnie will be back for this new Terminator movie and will be involved with the franchise moving forward. At this point, is his involvement going to be too distracting? And could it pull away some of the horror and dramatic tension that the new film might be trying to cultivate? Or could we see Arnie deliver a performance more along the lines of what we have seen in something like Maggie? If he is determined to stick with the series, we probably need to see him bring something very surprising and fresh to the table.

We have heard quite a few striking rumors regarding the Terminator franchise, so we will have to take this latest one with a grain of salt. But of everything we have heard about the possible future of the series, this is the one that has us the most excited. The original film is an incredibly effective piece of horror and seeing a director with a strong horror vision for the franchise get a crack at a new movie sounds great. We will keep our eyes and ears peeled for any more significant updates. 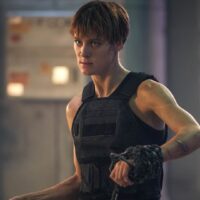