It seems there is just no stopping Netflix’s incredibly improbable new hit Squid Game. According to Nielsen rating data, the South Korean drama hit an incredible popularity milestone last week by clocking in more than 3 billion minutes of viewing from Netflix users in the U.S. alone. The Hollywood Reporter notes that Squid Game raked in 3.26 billion minutes of watch time for the week of Sept. 27 through Oct. 3, up from 1.91 billion from just one week prior.

With a 71 percent bump, Squid Game continues to be a breakout hit among Netflix viewers for a show that seemed on paper like it would apply to a niche audience in a foreign market that, frankly, doesn’t tend to get a lot of play in the United States. It marks the first series in the streaming giant’s history to surpass 3 billion minutes of watch time in a single week since The Crown hit the milestone in November of 2020. The outlet reports that, by comparison, the most-watched show on traditional TV, per the Nielsen ratings, NBC’s Sunday Night Football, had about 5.3 billion minutes of viewing time. While that’s quite a bit more than Squid Game received, it seems that the divide between sports fans and nerdy South Korean dramatic thriller nerds is more narrow than ever.

Squid Game isn’t the only breakout hit for Netflix right now. Deadline reports that it currently has five of the top original SVOD titles per Nielsen’s ratings. Sitting at number two is Midnight Mass (1.71 billion minutes). Lucifer hit 536 million, The Great British Baking Show clocked in at 534 million and Sex Education clocked in at number five with 469M.

However, Netflix isn’t completely dominating the streaming market. All of the big streamers have a place in the top 10 Neilsen ratings. AppleTV+ continues to win big with season 2 of Ted Lasso. That was closely followed by Marvel’s What If…? for Disney+, which beat out Hulu’s Only Murders in the Building and Amazon’s Goliath over the same period of time. Still, none of them hold a real candle to the viewership of Squid Game.

It’s not altogether surprising that Squid Game is resonating with American audiences. The plot focuses heavily on social and economic inequality and the great, somewhat nerdy lengths desperate enough people will go to in order to pull themselves out of their financial strife. The plot focuses on a group of people in dire financial situations in South Korea who are offered an opportunity to compete in a series of kids’ playground games in a battle royale-type tournament for the chance to win enough money to keep them all set for life. However, it quickly becomes clear that the consequence for losing any one of these games is the contestant’s swift and brutal execution.

All of the topics and metaphors in Squid Game, unsurprisingly, resonate incredibly well with a U.S. audience that is largely dealing with a lot of the same things. Then again, it’s possible that it’s not just about the United States. Nielsen ratings only track data within the country. Squid Game, meanwhile, is an international hit, breaking records throughout the world. So, maybe it’s tapped into something that’s more to do with humanity than any one culture. 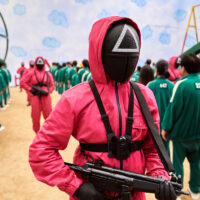