Back in December, we got the briefest of previews of Ambassador Spock in the first trailer for the upcoming game Star Trek: Resurgence. On Tuesday, IGN gave us a lot more of the new Spock in a gameplay preview — the first released for Resurgence. And wow, does this guy sound just about as much like Leonard Nimoy as you can get without literally bringing the actor back from the dead.

The video released by IGN on Tuesday is a little over seven minutes long, with Ambassador Spock briefing officers on their current assignment. Two races — the Hotari and the Olydians — are on the brink of war and Ambassador Spock has been sent in to help broker a peace. Along with the picture the United Federation of Planets strives to paint of itself as a benevolent, peace-loving union, since the two species provide dilithium to the UFP, Starfleet has plenty of practical reasons to quiet things down as well. Hearing it all explained through this new actor’s voice makes it impossible to not think of Leonard Nimoy. In the clip, the player controls First Officer Jara Rydek and her dialogue choices during the briefing. You can watch the video below.

The name of the voice actor has yet to be revealed, and while Star Trek: Resurgence has an IMDb page, no voice actors’ names are yet listed. While the player controls Jara Rydek in this particular scene, she won’t be the only character available. In different scenes, players will instead take control of Engineering Crewperson Carter Diaz. The game is being developed by Dramatic Labs, which employs many of the developers who were left hanging when Telltale Games went under. No doubt, any fans of Telltale’s style recognize their hallmarks in the above video, though the game will also include more action than fans of Telltale may be used to.

Dramatic Labs’ FAQ sets the date of Star Trek: Resurgence at 2380, which places it a year after the events of the final pre-Kelvin Timeline Trek film, 2002’s Star Trek: Nemesis. It’s also the same year that the animated series Star Trek: Lower Decks begins. With the unnaturally long lives of Vulcans, the presence of Ambassador Spock makes sense. In fact, Leonard Nimoy made a guest appearance on Star Trek: The Next Generation in the two-part “Unification.”

In fact, it’s possible that the famous two-parter could raise a bit of a question about the integrity of Star Trek: Resurgence‘s story. In “Unification,” Spock travels to Romulus in the hopes of starting the process of bringing the Vulcan and Romulan people back together as one people. By the end, we learn the Leonard Nimoy character was lured to Romulus under false pretenses, but regardless he still refuses to leave Romulus until the job is done. Which raises the question of why, in Resurgence, he has apparently left the planet. Of course most non-TV or film Trek media is considered non-canonical, but it would be reassuring to see that addressed in the story.

We don’t have a firm release date yet for Star Trek: Resurgence, but IGN says to expect it later this year. It will be playable on PC, PS4, PS5, and XBox Series X/S. Hopefully by then we’ll have some idea of who the heck is doing that near perfect Leonard Nimoy impersonation. 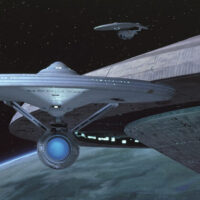 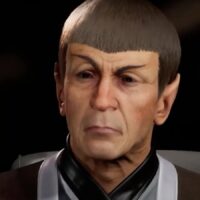