After the well-rounded but tragic ending of Iron Man in the Marvel Cinematic Universe (MCU) fans have been eager for Robert Downey Jr. to get in front of the camera again. Looks like all the wishes have finally been granted as the actor will soon be seen starring as a villain in an espionage thriller for HBO.

As reported by Deadline, the HBO series will be based on Viet Thanh Nguyen’s 2016 Pulitzer Prize-winning novel The Sympathizer. Robert Downey Jr. is the first cast member of the series while the rest of the cast is yet to be confirmed. Though Downey’s role in the series has not been disclosed, he will not be playing the title character and is instead the villain in the story.

The series will be set in the final days of the Vietnam War and will see a North Vietnamese mole for the Communist forces in the South Vietnamese army who has been exiled to the United States as a result. According to the novel’s description, the satirical spy thriller is a “blistering exploration of identity and America, a gripping spy novel and a powerful story of love and friendship.” The novel has been lauded for its distinctive style and the writer’s way of writing has been compared to the likes of Kafka, Orwell, and Genet. The cast will be predominantly Vietnamese, including the lead character, apart from Robert Downey Jr.

The series will be directed by Oldboy director Park Chan-wook, who is also its co-showrunner and executive producer along with Don McKellar. Robert Downey Jr., his wife Susan Downey, and Amanda Burrell from Team Downey are also on board as executive producers along with Niv Fichman and Kim Ly under Rhombus Media.

Ever since Robert Downey Jr. hung up the suit of Iron Man in the MCU, he had been on the lookout for projects that will allow him to expand his bandwidth as an actor. As per Deadline, it was the appeal of playing a different character and getting out of his comfort zone that attracted the actor to the HBO series. Reportedly, Downey will be playing many iterations of the main antagonist- a congressman, a CIA agent, and a Hollywood film director in the series.

As for his other ventures since his long-term stint as the billionaire, Tony Stark came to an end in the MCU, Robert Downey Jr. has focused on executive producing shows like HBO”s Perry Mason and the hit Netflix series, Sweet Tooth. Even though the actor has vehemently denied any chances of ever returning to the MCU, Giant Freakin Robot had recently shared an exclusive report about RDJ wanting to make an MCU return as Iron Man.

But he wants in as an Artificial Intelligence version of Tony Stark in the upcoming Disney+ series, Ironheart. The series will star Dominique Thorne as Riri Williams, a teenage prodigy who eventually takes over Iron Man’s responsibilities and becomes Ironheart who is aided by an AI Tony. But as per our reports, Robert Downey Jr. is demanding a hefty paycheck for his return and given the hold Iron Man still has over MCU fans, it wouldn’t be a surprise if Disney agrees to his demands. 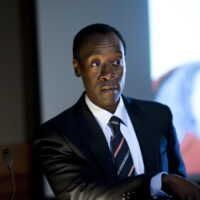