HBO’s adaptation of The Last of Us isn’t likely to be a bright, happy extravaganza of infectious fun and rainbow cookie dough. Few post-apocalyptic stories commit the crime of being too cheerful. But now fans of the series waiting for the adaptation have more reason to be bummed out — in spite of reports to the contrary, we won’t be seeing Pedro Pascal on HBO as Joel Miller any time this year.

Deadline reports that at the very earliest, HBO’s The Last of Us series could premiere in 2023. The outlet spoke to HBO and HBO Max Chief Content Officer Casey Bloys about the show, who said, “It’s not going to air in 2022 — they are still shooting in Canada. I imagine you will see it in ’23.”

While most delays announced in the past couple of years have had something to do with the COVID-19 pandemic, really we shouldn’t be too surprised about this announcement. The Last of Us was first announced as being in development at HBO in early 2020. At that point neither Pedro Pascal nor any other acting talent were announced as being attached to the project. After filming began in Canada, the project was heralded as the biggest film or TV production in Canadian history. All things considered, maybe a three year turnaround time between development and premiere shouldn’t be that big of a shocker.

In fact, HBO practically already broadcast that 2023 would be the premiere year a couple of weeks ago. HBO released a promotional image that changes the year of The Last of Us‘ fictional virus outbreak from 2013 to 2003. That makes the year of the series’ setting 2023.

Like just about every other big genre production these days, details about the plot of The Last of Us have been kept under wraps, but just as inevitably the leaks come. Last November, grainy footage of a scene being shot in which Pedro Pascal’s Joel Miller is seen having a fight with another character emerged on Twitter. All it really reveals is that at some point, Joel Miller is going to fight someone. So, hey — spoiler warning.

Pedro Pascal’s post-apocalyptic series is based on the 2013 video game of the same name, set a couple of decades after civilization collapses under the weight of a horrific virus. Pascal’s character — voiced by Troy Baker in the game — is Joel Miller, who is hired to escort 14-year-old Ellie to an organization looking for a cure to the virus. Ellie is immune to the virus, and so may very well be the key to humanity’s future. Ellie was voiced by Ashley Johnson in the game and will be played by Bella Ramsey in the live-action series.

The Last of Us adaptation is written by the game’s writer, Neil Druckman, and Craig Matzin. Matzin created and wrote HBO’s Chernobyl, so you know he’s used to writing happy-go-lucky, life-affirming tales of peanut butter chocolate waterfalls and superhero puppies. Whenever we finally see Pedro Pascal as Joel Miller, the story we get promises to be just as heartbreaking as the games fans love. 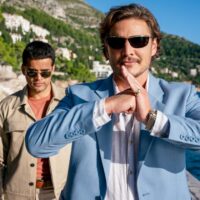 Pedro Pascal Is In Buffy The Vampire Slayer, See Who He Played