See Norman Reedus And Keanu Reeves On Set Together

Ride with Norman Reedus might have its first guest in Keanu Reeves, as the pair of actors were spotted with one another at Reddus's restaurant in Utah.

Who would have thought that Norman Reedus and Keanu Reeves would pair with one another for a project? Well, maybe a better question is, what took so long? Reedus and Reeves were recently spotted on the set of Ride with Norman Reedus, which is a show that is dedicated to motorcycles, travel, and perspective. What a fitting show for each of these actors. Both happen to be enthusiasts of motorcycles, after all. Ride is in its sixth season, and the unscripted AMC show follows Reedus as he travels the world. You can see the image of the pair below:

Norman Reedus and Keanu Reeves happened to be shooting the episode in Utah (Point Break fans, anyone?), where Reedus happens to also own a restaurant called Nic and Normans. The official Instagram page showcased the pair of beloved actors likely as they had finished eating or were about to eat for the sake of the show. Either way, this is a fantastic photo. Another recent instance saw Jackass star, Johnny Knoxville, paired with Reedus at a custom bike shop in Italy. Though the slate of guests for Ride with Norman Reedus Season 6 has not yet been officially revealed, we can bet money on Reeves and Knoxville being among those guests. We honestly can’t wait to watch those episodes.

Norman Reedus and Keanu Reeves seem to have the same type of personality, as they are often seen as mysterious but generous. They are also both beloved actors who have been fan favorites for decades. Of course, everyone loves Reeves from his countless films, and Reedus has been a central figure in The Walking Dead. It is great to see this pair linked up for a show that details their love for motorcycles. We hope that this is the start for the pair to end up in a film or movie together. Reeves might have to pull some strings to get Reedus involved in the John Wick franchise at some point. That would be amazing.

Ride with Norman Reedus was renewed for a fifth season back in 2019, but with the pandemic restrictions, the season did not come out until 2021. There has not even been an official mention that the sixth season would be happening, but now that seems to have been proven through internet sleuths who spotted Norman Reedus with Keanu Reeves, and then with Johnny Knoxville. Some of the past guests have been Peter Fonda, Jeffrey Dean Morgan, Dave Chappelle, Michael Rooker, Josh Brolin, and so many more.

Quite honestly, if you have not seen the show, now would be the perfect time to get into it. Norman Reedus and Keanu Reeves speaking about biker culture and life in an hour-long segment where they travel with one another sounds amazing. The current seasons can be streamed on Pluto TV right now. Sure, you will have to deal with some ads, but there are plenty of amazing guests that will make people forget about those pesky interrupters. We can’t wait to see what Reeves and Reedus have to say to one another. 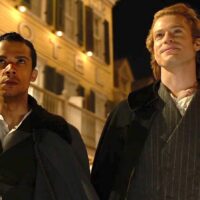