While there’s still no trailer for Thor: Love and Thunder, fans are beginning to get a better idea of what their beloved characters will look like when the film comes crashing into theaters on July 8. And while we knew that Natalie Portman would step back into the franchise to reprise her role as Jane and even become Mighty Thor, rumors swirled as to how she would get there. Confirmed by a rollout of merchandise centered around the upcoming Marvel movie, we now know that Jane came to be the superhero when she “mysteriously comes to possess the hammer Mjölnir.” Ahha! While there are still tons of questions to be answered, at least one is solved.

The Taika Waititi directed follow up to 2017’s Thor: Ragnarok has been a long time coming. Not only has it been five years since a standalone Thor movie was released, but that time was made even longer after many will argue that Ragnarok was one of the best Marvel Cinematic Universe films yet. And although we saw the God of Thunder in both Avengers: Infinity War and Avengers: Endgame, he of course had to share the screen with a slew of other characters, not to mention there was no Natalie Portman in the films. With her new full-time involvement in the world of Thor, we’re left wondering if that will all change and if she’ll join ranks with the Avengers, leading her to bolster a long running career within the MCU.

It would be great to have some or any of these questions answered, but the information surrounding Thor: Love and Thunder is being kept so tightly under wraps that even other productions, including the Amazon Prime Video series The Boys has called the film out for failing to release a timely trailer. It is odd that the first bit of information we’re getting about Natalie Portman’s transformation into Thor is via a toy, but we’ll take what we can get! The film will also stand to answer some questions about what another branch of the MCU has been up to, the Guardians of the Galaxy. Last we saw the cosmic travelers, they were gearing up to ship off alongside Thor at the end of Endgame. And with their next film not landing in theaters until May of 2023, questions abound for what they’ve been up to after all of this time as well.

With both the Guardians and the group surrounding Love and Thunder coming together for at least a little bit during the new film, fans are sure to catch some laughs. We could definitely see Rocket trying to flirt with Jane only to be brutally turned down while Drax the Destroyer is bound to bring the laughs with some deadpan. Along with Natalie Portman, we know that Love and Thunder will feature a long list of talent including Christian Bale who will make his MCU debut as bad guy Gorr the God Butcher (yikes!), the obvious Chris Hemsworth, Tessa Thompson, Chris Pratt, Bradley Cooper, Karen Gillan, Vin Diesel, Pom Klementieff, and Sean Gunn, along with some more speculated performers. For now, we’ll just need to accept the fact that at least we know more about just how Jane comes to wield Mjölnir.

New Photo From Thor: Love And Thunder Reveals Major Changes For One Hero 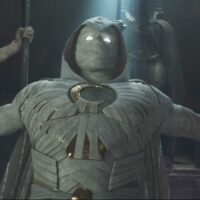