Former Batman Michael Keaton has been attached to Andy Muschietti’s upcoming The Flash film for quite some time, but now new reports are casting doubt on the actor’s return to one of his best roles.

According to Small Screen, Michael Keaton’s return to the iconic DC Comics character may not be a done deal just yet. This is not particularly surprising, especially because Keaton has recently come forward with uncertainty about actually coming back. This has been chalked up to scheduling conflicts and COVID-19, but Small Screen’s report sheds some new light on what is actually going on behind the scenes.

The report attributed the “chaos” surrounding the film’s production to creative differences, but it alluded to deeper conflicts threatening the production. The Flash has been delayed many, many times; it was originally scheduled for release in 2018. But when Warner Bros. announced Michael Keaton’s involvement in 2020, fans were even more excited and hopeful that things were back on track and that we would finally be seeing The Flash sooner rather than later.

It would be a shame if these “creative differences” ended up pushing the film’s release date back yet again. There have been so many great updates, and for a bit it appeared that everything was still on track. Muschietti just cast the movie’s Supergirl, adding fuel to the notion that the film would hit theaters in the foreseeable future. But now, with Michael Keaton potentially out of the picture and Warner Bros. executives reportedly nervous about it, what happens next is anyone’s guess.

Michael Keaton first portrayed the Caped Crusader in Tim Burton’s 1989 Batman, before going on to reprise his role in its sequel, the superior Batman Returns. If he does end up appearing in The Flash, it will be in addition to Ben Affleck’s interpretation of Batman. We have also seen reports saying that Keaton will only be returning as Bruce Wayne, but now even that seems to be thrown into question.

Michael Keaton is definitely one of the best live-action Batmans we have ever gotten, and it would be amazing to see him reprise his role for the DC Extended Universe. He deftly blended ’80s camp with healthy doses of darkness, making him a thoroughly unique version of the character Bob Kane and Bill Finger created back in the late 1930s. His presence in The Flash would absolutely elevate the entire film in some fun and unexpected ways, so here’s to hoping Warner Bros. gets itself together and gives us one heck of a great movie.

Everyone involved with the film seems very excited about it, so it is concerning to see news of potential on-set conflicts negatively affecting the movie’s production. The director seems especially pumped, which bodes well for The Flash and will definitely amount to a passionately made picture at the very least.

If all goes well and this is resolved soon, then The Flash will hit theaters on November 4, 2022. If it isn’t, then we may have to wait even longer for the highly anticipated DC Extended Universe movie. 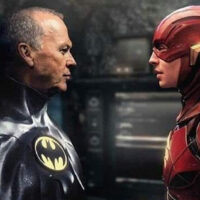