If you're not a fan of Martin Short, are you even alive?

Martin Short is trending on social media but don’t worry; the Only Murders in the Building star is alive and doing fine. Instead of trending for controversies or catastrophes, one of the funniest men in the world is trending for a hilarious performance on a late night talk show. Martin Short showed up on The Tonight Show with Jimmy Fallon Thursday night and proceeded to perfectly roast his host, along with other deserving parties.

As soon as he was introduced, Short started the roasting with, “James Thomas Fallon, my God, your name screams out diversity.” Clearly tickled by getting teased by the comedy legend, Fallon struggled to keep it together. Martin Short continued, hinting that Jimmy Fallon had some ugly associations. “Now I haven’t seen you since the big Saudi golf tournament,” Short said. “Who knew that you and the Crown Prince were such buddies?” Then, seeming a bit like Zach Galifianakis on Between Two Ferns, Short added, “In fact, tell everyone what you were telling me about how the Proud Boys is so much more than a club, what did you mean by that?” You can see the roasting commence below, including a clip Short uses to promote Only Murders in the Building.

As you can see in the clip, Martin Short doesn’t limit his victims to Jimmy Fallon; in fact, he doesn’t even limit his Saturday Night Live alum victims to Fallon. When the host asks him how his summer’s been, Short answers, “Do I regret my ‘Kim and Pete Forever’ tattoo? Sure.”

Martin Short uses his time with Jimmy Fallon to take a lot more pointed shots at former President Donald Trump and his family, claiming to be a member of Trump’s Mar-a-Lago club where “if you’re a member you can just read as many classified documents as you want.” He also jokes about babysitting Trump’s sons, saying that when the boys played Monopoly, “their version of the winner is the first person to yell ‘bankruptcy!’”

Nor does Short spare his friend and longtime colleague Steve Martin. The pair are currently on a stage tour with their show You Won’t Believe What They Look Like Today, as well as both being up for the Outstanding Lead Actor in a Comedy Series Primetime Emmy for their work on the Hulu mystery-comedy Only Murders in the Building. “If I can’t win I hope that he wins,” Martin Short told Jimmy Fallon. “But I can win, so screw him.”

In under five minutes, Martin Short expertly counts among his roasting victims not just Jimmy Fallon; but the Trumps, Steve Martin, Pete Davidson, Kim Kardashian, and Will Smith. But he doesn’t forget about his host. Toward the end of the carnage, after claiming that if Steve Martin wins the Emmy he’ll “send Will Smith up to slap him,” Short ends it with, “Here’s the thing. If someone had told me 20 years ago that I would be on The Tonight Show with Jimmy Fallon with all these Emmy nominations, I would have said, ‘Jimmy Fallon?’”

Twitter could not get enough of it, sending Martin Short’s name trending for his Jimmy Fallon interview. A lot of fans expressed that, during a time when the political landscapes seem like minefields, Short gave us all the laughs we needed. You can see some of the social media love below.

If you can’t get enough of Martin Short on Jimmy Fallon, never fear; his series Only Murders in the Building is streaming on Hulu. The second season finale hits Hulu on Tuesday, August 23. The Emmy-nominated show has already been renewed for a third season. 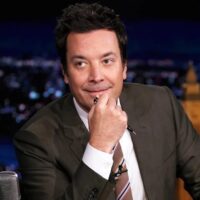 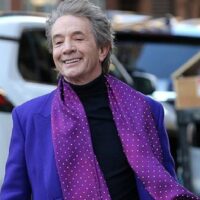