Mark Hamill and Patrick Stewart are icons to many fans across the globe. Thanks to their prominent roles in the Star Wars and Star Trek franchises, the two have become figureheads for some of the most recognizable creations in modern history. Thanks to a recent ad campaign from Uber Eats, these titans ended up getting together for an interview. Naturally, the discussion eventually trended towards the relationship between Star Wars and Star Trek.

In the interview with Men’s Journal, Mark Hamill revealed himself to be a true nerd as he broke down the differences between Star Wars and Star Trek, calling the former series fantasy and the latter outright science-fiction. Hamill has a well-documented history of geekiness – his single directorial effort Comic Book: The Movie is a testament to his true blue dork cred – and it is clear he can back up his assertions with real fan knowledge.

That was definitely made clear later in the interview when the question of a hypothetical crossover between Star Wars and Star Trek was brought up. Patrick Stewart was immediately on board with the idea, but Mark Hamill’s assertion that the two were like apples and oranges spoke to his understanding of how the separate universes function better apart than they ever might together.

Mark Hamill and Patrick Stewart also toyed with what it would be like if Luke Skywalker decided to join Starfleet. Stewart said that Captain Jean-Luc Picard would want Luke as a part of his crew, but would keep a watchful eye on him as he has “a few personality traits that Picard might want to keep tabs on.” What was really interesting in that exchange was when Hamill decided to really get nerdy about the world of Star Trek and how it would relate to the character of Luke Skywalker.

“I think Luke would very much respect Picard and the Starfleet force as a whole,” said Mark Hamill. He goes on to talk about how Luke’s involvement in the Rebel Alliance and their battle against the Galactic Empire would actually make Starfleet an appealing organization. Plus, Hamill feels that Luke is “a lifelong student,” and the opportunities that a group like Starfleet offer would be incredibly enticing to Luke.

Considering that Patrick Stewart’s creative input for this new era of Star Trek has had less than stellar results, it is not surprising to hear another eminent figure in the world sci-fi/fantasy give a perspective that sounds a lot more in line with the franchise’s ideals and goals. Maybe Mark Hamill needs to pop over to Paramount and give them his two cents about what to do with the future of the franchise!

Regardless, it is very fun to see these two beloved figures come together in some form, even if it is for a series of cheeky advertisements. Could Mark Hamill end up making a future appearance in the Star Trek franchise? Anything is possible. He is a well-regarded voice actor. Maybe Star Trek: Lower Decks could have him on for a guest spot? We will continue our wishful thinking as we watch Hamill beat Stewart at Connect Four a couple more times.

You can watch the other two Uber Eats commercials below: 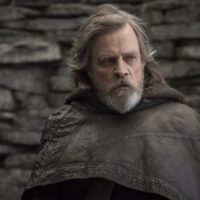