The world of Yellowstone just keeps getting bigger and bigger these days with a slew of new projects hitting streaming in due time. It’s a testament to the world creator Taylor Sheridan and star Kevin Costner have put together that there is a demand for more and more stories, and more and more accompanying projects surrounding the Duttons. The latest news has another broadcast hitting the air soon which will help fans to dive even deeper into this world of cattle ranching. Deadline has it that Paramount+ is set to air ET Presents: Yellowstone Aftershow which works as an accompanying project to new episodes that are going up in the series.

ET Presents: Yellowstone Aftershow will air twice and will be hosted by Cassie DiLaura. The plan is for each episode to feature interviews with members of the main cast as well as the creatives behind the series. Kevin Costner and Taylor Sheridan will bot sit down for episodes to discuss the making of the series as well as different storylines within the production. Other interviews will include series stars Kelly Reilly (Bethany Dutton), Cole Hauser (Rip Wheeler), Luke Grimes (Kayce Dutton), and Jefferson White (Jimmy Hurdstrom). These are meant to promote and lead up to the penultimate episode and finale for this fourth season. The two Yellowstone Aftershow will air on December 19th and 26th respectively.

The news of the Yellowstone Aftershow show hitting the streamer comes on the heels of another accompanying project entering the Yellowstone universe as well. That’s going to come in the form of The OfficialYellowstone Podcast which will be hosted by Hurdstrom. That is going to also be interviewing key members of the show, detailing some behind-the-scenes pieces of filming and what goes into playing the different characters. While a number of cast members are already committed to coming on the podcast, it isn’t clear if Kevin Costner will be one of them.

Of course, the world Yellowstone is also branching out in the form of new series on Paramount+. 1883 is set to release its first two episodes on the streamer on Sunday, December 19th. It will land in the eponymous year and follows the story of the early Dutton family as they make their way across the frontier in search of the land that will ultimately become the family ranch. The series stars Tim McGraw and Faith Hill as James and Margaret Dutton, the grandparents of John Dutton (Kevin Costner). The series looks like a gritty tale about the dangers during this time period and the blood price paid for what the Duttons eventually set up.

Another series, 6666 is also in the works and will be in the same timeline as the Kevin Costner version. It will take its story to another ranch, this one in Texas. There will surely be some overlap between its story and Yellowstone’s though it isn’t exactly clear how that will happen. In all, Yellowstone continues to be Paramount+’s biggest hits and the world is only growing around the series. 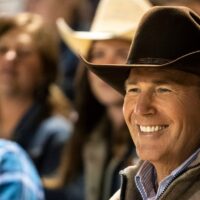