Spider-Man 3 Is Bringing Back Jamie Foxx As Electro

Jamie Foxx made quite the impression as the villainous Electro in The Amazing Spider-Man 2. Exactly what kind of impression is left up to the person watching it. If you asked the majority of critics and audiences, it was not a favorable experience. Suffice to say that no one ever expected Foxx to return as Electro in any way, shape, or form. Well, that is simply not the case with today’s news.

The Hollywood Reporter has learned that Jamie Foxx will be returning as Electro in the Marvel Cinematic Universe’s third Spider-Man film. This has opened up the floodgates to tons of speculation about how this could even happen. The Amazing Spider-Man 2 existed in a completely separate universe from the current iteration of Spider-Man, so are we going to start seeing the multiverse make its way to Spidey’s world?

Well, we already have with Spider-Man: Into the Spider-Verse and it sounds like Sony wants to push that idea even further. The inclusion of Jamie Foxx in the third MCU Spider-Man film would seem to indicate that Spidey is going to be enjoying some multiversal shenanigans in live-action and animation. This might track with what we have heard about the upcoming MCU entry, Doctor Strange in the Multiverse of Madness, which will start filming very soon. Perhaps the MCU is going to be experimenting with multiverse storylines across a number of its major properties.

This Jamie Foxx news has an extra amount of complication thrown into the mix due to the rights issues regarding Spider-Man and his world. Sony Pictures owns the rights to individual Spider-Man movies and spinoff movies, but they also have to share Spidey with the Disney/Marvel films and it’s assumed they either receive none of the box office take from those movies or a very small portion. But, with more connections to the MCU being hinted at in the future Spidey spinoffs like Morbius, could a new deal be in place to spread the multiverse love across all the Spidey properties?

Regardless, the news that Jamie Foxx will return as Electro in the third MCU Spider-Man film is so wacky that it seems kind of brilliant. For all the things that didn’t work about The Amazing Spider-Man 2, its unhinged cartoonish tone was not one of them. Foxx brought a truly ridiculous and nutso energy to the role of Electro and it could be very fun seeing him recapture that lunacy. The MCU movies are often quite fun but they have rarely experimented with being genuinely zany. This kind of news promises something of that caliber.

The third MCU Spider-Man film is currently scheduled for December 17, 2021. However, we are fairly certain that the release date will be changed since Disney/Marvel has had to shuffle around their entire release schedule this year. Once we know the new release date, we can give you a better idea of when you can expect to see Jamie Foxx zapping Spidey on the big screen. We just hope poor Max Dillon keeps that gap in his teeth fixed. 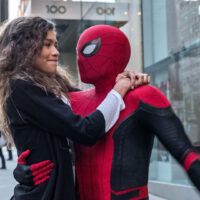 The Major Villain In Spider-Man 3 Revealed?

Spider-Man Teaming Up With One Of Marvel’s Most Popular Heroes?