They were both in The Matrix movies, but not the same Matrix movies. Hugo Weaving turned the chilling Agent Smith into one of his signature roles, but sadly he wasn’t able to make it for last year’s The Matrix Resurrections. Meanwhile, the fourth chapter of the saga of Neo was the first chapter Jessica Henwick got to be a part of. She starred in Resurrections as Bugs, the leader of a resistance group convinced Neo was still alive after the events of The Matrix Revolutions. While they didn’t get to co-star in a Matrix flick, now Weaving and Henwick will get the chance to collaborate on the upcoming thriller The Royal Hotel.

That’s the word from Deadline, who reports Hugo Weaving and Jessica Henwick will be joined by Julia Garner of Ozark fame and writer/director Kitty Green in The Royal Hotel. Garner and Green will play two friends backpacking in Australia. When they stop at the titular bar “an unnerving situation” unfolds. There was precious little plot information available about the film, and no word on who Henwick or Weaving are playing or how their characters fit into the social thriller.

The new Hugo Weaving film will be directed and co-written by Kitty Green, and if Green’s earlier work is any indication, it will be worth watching. While Green has only directed one other narrative feature film — 2019’s The Assistant which also starred Julia Garner in the lead role — the films she’s made have received near universal praise. Her directing credits include two feature-length documentaries, including one that should hold special relevance in light of recent events — 2017’s Casting JonBenet and 2013’s Ukraine Is Not a Brothel. The Royal Hotel will mark her first credited appearance in front of the camera as an actor. The film’s other co-writer is Oscar Redding (Van Diemen’s Land).

As far as Hugo Weaving and Jessica Henwick are concerned, The Matrix isn’t the only franchise in which they’ve both contributed but have yet to collaborate on. He didn’t return to reprise the character for the last two Avengers films, but Weaving was the first actor to play the MCU’s live-action Red Skull in 2011’s Captain America: The First Avenger. Meanwhile, Henwick played Colleen Wing in Marvel’s Netflix series; appearing as the character in Iron Fist, The Defenders, and even briefly in Luke Cage.

Hugo Weaving missed his chance to collaborate with Henwick on The Matrix Resurrections because of scheduling. In December, the film’s co-writers David Mitchell and Aleksandar Hemon explained negotiations were going on between Weaving and the production to get him on board for the film, but sadly they were left unresolved that the production was forced to replace Weaving with Jonathan Groff (Mindhunters).

He may have missed The Matrix Resurrections, but Hugo Weaving hasn’t left the sci-fi world behind. Last month, the dystopian sci-fi thriller Expired premiered. Weaving starred as Dr. Bergman, a scientist with dangerous information about a covert government program in which children are abducted and stripped of their emotions through use of experimental hormones. 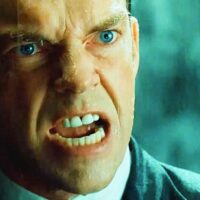