Elizabeth Olsen isn’t someone you’d think would get caught up in the cancel culture net, but it looks like it may be happening for the actress. The WandaVision star, who’s getting a chance to headline her first work since taking on the Scarlet Witch character all the way back in Avengers: Age of Ultron, has made comments which some fans have deemed as racist. There’s been some backlash against Olsen and her choice of words when describing her character.

The comments in question by Elizabeth Olsen came on Vanity Fair’s Still Watching podcast. On the episode, she was discussing her WandaVision character Wanda Maximoff/Scarlet Witch and some of the character’s roots and backstory. During the interview, she described Wanda as a “gypsy” which caused a stir. This word, sometimes used to describe people of Romani descent, is considered offensive because of the derogatory implications. Though at one time it may have been an accurate description of a group of people, it’s been used pervasively as a term of slander for different groups. Olsen’s use of the word was met with derision.

And apparently, the outrage was only fueled by Elizabeth Olsen apparently having used the word to describe Wanda in the past and being expressly told it was offensive. This happened back in 2015 when she first took the role. It doesn’t help that in her past quote, she was clearly using the word to describe a “lesser” person. Here was that previous quote:

It will be interesting to see if this has considerable backlash for Elizabeth Olsen in terms of her role as Wanda Maximoff or her tenure at all within the Marvel Cinematic Universe. Considering no one from the studio has mentioned it and she is apparently integral to Marvel’s Phase Four, I suspect we see something like an apology and then a distancing from the comments. Not to say that “okays” the comments or the repeated use of a word that’s known to be offensive, but more that seems standard operating procedure in Hollywood these days.

Elizabeth Olsen is currently starring in WandaVision which kicked off the aforementioned Phase Four. It’s been met with fantastic reviews and offers a totally new look and feel to the Marvel Cinematic Universe. It’s clearly setting up Olsen’s Scarlet Witch as something much bigger in the universe moving forward, possibly even in a villain role. It’s a fascinating turn for the character and the universe, possibly having been setting up like this for years. After sitting on the sidelines for many of the Avengers movies despite her considerable powers, the character is set to be at the focal point moving forward.

Beyond just that show, it’s been confirmed the Elizabeth Olsen will be appearing in Spider-Man 3. It’s unclear just how big her role will be with “multiple scenes” being discussed, but it’s just a testament to how much her imprint is going to be on Marvel Cinematic Universe productions going forward. Let’s see if this latest dustup does anything to jeopardize it. 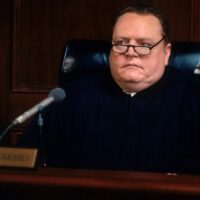