Prior to the release of Dune, we exclusively reported that Dune 2 had already been greenlit. This was huge news for fans. The first movie starts with “Part One” written across the screen. Now, the studio has officially confirmed our scoop. The sequel is on the way. While that would be good news on its own, they have shocked fans by also announcing a release date. The anticipated sequel will release in theaters on October 20, 2023.

Legendary Pictures celebrated the news with the release of a Dune Part Two graphic, seen above. Fans who watched the first movie may have a big reaction to the simple teaser for Dune 2. The first film began with Dune Part One written across the screen, making many in the audience nervous at the sight. This new image is bound to give many fans both relief and excitement for the upcoming sequel.

While the release date is very soon, it also matches up with what Denis Villeneuve promised fans. The director said that as soon as he got the official green light, he would be ready to get production rolling as soon as possible. In fact, he has already been working on the script. For a movie on the scale of Dune 2, a release date two years away is very promising. The first film took them over two years to make, and then faced several release delays due to COVID-19 lockdowns.

This 2023 release date will mean that fans can watch Dune 2 in theaters almost exactly two years after the release of part one. The first movie was released on October 20, 2021, in theaters and on HBO Max. While many believed that the streaming release would hold Dune back at the box office, the movie actually brought in $40.1 million during its domestic opening weekend. Those were the best box office numbers for a Denis Villeneuve movie so far.

One question that wasn’t answered in the new announcement was whether Dune 2 would also release on HBO Max. Currently, the studio has said that their 2022 releases will be exclusive to movie theaters. While 2023 could possibly see movies released on streaming and in movie theaters at the time, it’s particularly doubtful for this movie. The film’s director was adamant that his movie should be watched on a theater screen. He compared watching it on a home television to driving a speedboat in a bathtub. Of course, he may change his mind, and the studio may make their own decisions on this, but fans should likely expect a movie theater-only release for Dune 2 when it releases in October 2023.

What else can fans expect from Dune 2? More Zendaya. The director has promised that Chani will be a prominent character in the sequel.

Those who were waiting to see part one until Dune 2 was confirmed, you are now in the clear to enjoy the first movie knowing that the sequel will soon be on the way. The first movie is currently on HBO Max and in movie theaters. 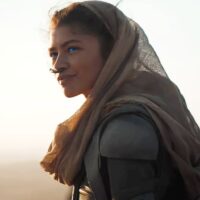