Over a year and a half after Game of Thrones aired its final episode on HBO, the network is getting its cast ready for a new prequel set in Westeros. After several canceled spinoff and sequel ideas, HBO is moving forward with House of the Dragon, a prequel based on George R.R. Martin’s Fire & Blood book. One of the newest cast additions to House of the Dragon is Doctor Who’s Matt Smith, who will play Prince Daemon Targaryen.

In addition to Matt Smith’s casting, House of the Dragon has also added Ready Player One and Bates Motel’s Olivia Cooke and Emma D’Arcy, who has appeared in such Amazon Original series as Hanna and Truth Seekers. Cooke will play Alicent Hightower, who HBO also says is “the daughter of Otto Hightower, the Hand of the king, and the most comely woman in the Seven Kingdoms.” Her closeness to the king makes her well-versed in the politics of the land. D’Arcy will play Princess Rhaenyra Targaryen, the first-born child of the king, who is also a dragon rider.

Matt Smith was most recently seen in two seasons of The Crown, and in this year’s horror film His House. He will next be seen in the upcoming Marvel-Sony film Morbius, and Edgar Wright’s latest film, Last Night in Soho, both of which are scheduled for a 2021 release. He will also appear in The Forgiven, by The Guard and Calvary writer/director John Michael McDonagh, which currently doesn’t have a release date.

Like Matt Smith, Olivia Cooke also has a lot of promising projects coming up. This year, Cooke has appeared in the comedy thriller Pixie, and recently starred alongside Riz Ahmed in Sound of Metal. Cooke already has two projects in post-production, as she will star in Little Fish with Jack O’Connell, planned for a February 5, 2021 release, and Naked Singularity with John Boyega.

While HBO has had many shows in the last year and a half that have gained critical appreciation and passionate audiences, such as Lovecraft Country, Watchmen, The Undoing, and I May Destroy You, the network hasn’t had anything with the mass appeal as the event television of Game of Thrones. Even though HBO is trying to find a series that could be the next big thing for them, including new series based on The Last of Us and Parasite, nothing yet looks to be as massive as Game of Thrones was for the network. However, with Matt Smith, Olivia Cooke, Emma D’Arcy, and Paddy Considine in the cast, this new story in the Game of Thrones universe is shaping up to be a promising follow-up.

Game of Thrones was one of the most celebrated series of all-time, earning 59 Primetime Emmy Awards, and winning Outstanding Drama Series four years. HBO – and most networks – haven’t had a success as gargantuan as Game of Thrones, so it makes sense that HBO is going back to what works. Matt Smith is already a huge get for this new prequel series, so it will be exciting to see who else fills in this cast as casting continues. 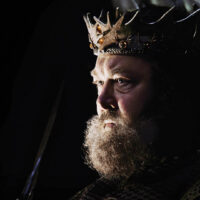