A growing list of celebrities including Marina Sirtis, Toni Braxton, Téa Leoni, Mick Foley, and more are leaving Twitter in the wake of Elon Musk's acquisition.

Celebrities are starting to quit Twitter after its acquisition by billionaire Elon Musk. So far the list of big names joining the exodus include singer Toni Braxton, retired wrestler Mick Foley, longtime Star Trek actress Marina Sirtis, and Bill & Ted royalty Alex Winter. As reported by NBC News and others, some of the stars slipped away quietly while others made it clear that they were going and exactly why.

Marina Sirtis was one of the first to announce her departure, writing that she “cannot be a part of anything owned” by Musk “or his band of deplorable’s.” That was on Friday, and a quick search on the platform shows she has since quit Twitter.

While as of the writing of this story, Grey’s Anatomy creator Shonda Rhimes is still on Twitter, she warned her followers that won’t last long with, “Not hanging around for whatever Elon has planned. Bye.”

Grammy-winning singer and songwriter Sara Barielles and “Un-Break My Heart” singer Toni Braxton have let their millions of followers know they’re quitting Twitter. Bareilles’ farewell tweet was vague but not mysterious, while Braxton’s indicated the singer had been exposed to far too much ugliness since Musk’s takeover.

Braxton wrote that she was “shocked and appalled at some of the ‘free speech’ I’ve seen on this platform since its acquisition. Hate speech under the veil of ‘free speech’ is unacceptable; therefore I am choosing to stay off Twitter as it is no longer a safe space for myself, my sons and other POC.”

Madam Secretary star Téa Leoni has likewise seen enough of the Musk-owned platform and announced she was quitting Twitter, adding she might be back “when the dust settles.”

Retired professional wrestler Mick Foley didn’t say he was quitting Twitter but that he was taking a break, and yet his account has been deactivated. Foley wrote on Facebook that “the new ownership — and the misinformation and hate it seems to be encouraging — has my stomach in a knot.” Likewise Billions co-creator hasn’t completely left the platform, but locked his tweets after encouraging his followers to find him other social media sites like Instagram and TikTok.

Alex Winter of Bill & Ted fame briefly left a message up on his account before quitting Twitter for good, urging his followers to keep in touch with him on other platforms. His account has since been deactivated. The same can be said of Erik Larsen — prolific comic book writer, artist, and CFO of Image Comics.

Larsen tweeted in April that he would quit Twitter if/when Elon Musk took over, and NBC News reached out to the Savage Dragon creator, confirming he’d made good on his promise. Joining him is Bill Morrison, best known for drawing series like Bongo Comics from The Simpsons franchise.

Meanwhile, some likeminded celebrities are refusing to quit Twitter but at the same time are encouraging others to stick around and speak out against Musk. Some of those stars include Marina Sirtis’ fellow Trek actors, like Tim Russ and Anson Mount.

Mount in particular let the new Twitter owner have it, criticizing him for promoting a conspiracy theory regarding the attack on Nancy Pelosi’s husband.

“Let’s be clear,” Mount wrote. [T]he richest man in the world, and the current owner of this platform, used his new toy to further a dumb-as-dogsh*t conspiracy theory belittling an 82-year-old grandfather who was attacked with a hammer. Orwell couldn’t have made this up. Fu*k Musk.” 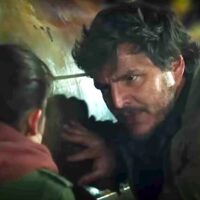