With Marvel’s Disney+ series, The Falcon and The Winter Soldier, fans of Sebastian Stan finally got to see his Bucky Barnes occupy center stage while executing his usual stellar action scenes. But while Bucky looked all suave and cool in those high octane action scenes, they weren’t as easy to shoot as we expected and the actor suffered some rather serious injuries while shooting the series.

During a recent chat with Variety, Sebastian Stan talked about his experience of shooting The Falcon and The Winter Soldier and shared how he injured his ankle on the very first day of shooting. He was shooting a scene for episode five where Bucky has to jump from a dock onto a boat. While it sounds easy for Bucky a.k.a. The Winter Soldier who is infused with the super-soldier serum, Stan ended up twisting his ankle so badly while landing that it initially felt like it was broken.

This painful injury was followed by Sebastian Stan breaking his pinky toe off-set. But despite the injury, he continued shooting the series. But the pain was so excruciating that Stan had to put his foot in a bucket of ice during every break between multiple takes.

In the past, while shooting his first Marvel Cinematic Universe film Captain America: The First Avenger, he had faced another on-set mishap. But while he is not indestructible like his on-screen character, Sebastian Stan does carry the grit and determination that Bucky is famous for as he has always continued shooting despite his injuries.

Sebastian Stan further reflected on the ongoing debate of whether Bucky and Sam have been presented as a couple in The Falcon and The Winter Soldier and how fans want the two to have a romantic twist in their story. Unlike the series director, Kari Skogland who has advised viewers to stop with their theories of how Bucky is bisexual and whether the series came with a gay subtext, Stan is just happy to know that people have liked the new duo i.e., Bucky and Sam and now it is up to people how they want to embrace it.

During the interview, Sebastian Stan also shared how he was inducted into the massive world of the Marvel Cinematic Universe. He shared that he received many calls from an unknown number on April 1, i.e., April Fool’s Day. As he was shooting something at the time, he ignored the calls but later when he checked his voicemail, he discovered that he has a message from Marvel boss Kevin Feige who offered him the role of James ‘Bucky’ Barnes. And the rest as we know is history.

Currently, Sebastian Stan is busy filming the much-hyped Hulu series, Pam & Tommy, where he will be seen playing the real-life character of Mötley Crüe drummer Tommy Lee opposite Lily James, who will be seen as former Baywatch star Pamela Anderson. The series is currently being filmed in Los Angeles with no release date announced yet. Following the Hulu series, Sebastian will be next seen in the spy film, The 355, set to release in early 2022, and the thriller film, Fresh. 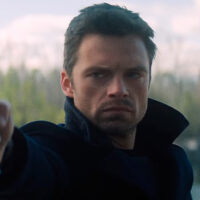