Violence seems to follow actor Jon Bernthal in all parts of his life. VIolence is prominent not only in the parts he plays but in his his real life too. It’s a demon that has served him well as an actor but not so much in reality.

Best known for his violent roles in The Walking Dead and The Punisher, Jon Bernthal is now finding ways to channel that violent nature into something positive. Is it working?

It’s not that Jon Bernthal grew up on the mean streets. Quite the contrary, he came from a very prosperous family. His father was a powerful corporate lawyer in Washington D.C. Bernthal attended the Quaker school Sidwell Friends, an academically tough, but high-profile school.

Even though the school was posh, Jon Bernthal says he and his friends were suburban kids but were always looking to do the most dangerous things. Bernthal was introduced to violence at an early age. He would be the enforcer during basketball games when either his brothers or father received a cheap shot. At school, he and his friends would fight kids from other schools. Nunchakus were their weapon of choice. His first trip to jail was at 17 when he was caught with dime bags.

Jon Bernthal’s antics definitely didn’t go unnoticed by his family. His older brother Tom spoke about Jon almost reverently via Esquire, “It’s amazing,” he said. “Jon was always the family fuckup. There’s, like, one legal thing in the world Jon could do—he’d make a great drug dealer—and that’s acting. He was lucky. We came from the one family in a million who didn’t throw him out of the house. The thing I remember is he could take over a room even when he was three. He’s always had that presence.”

That presence, though, cost Jon Bernthal a broken nose. Not once or twice, but 14 times in total.

Jon Bernthal got the recommendation early on to go study acting at the Moscow Art Theater. He did and it was an eye-opening experience for him. Not only was he learning acting, he learned ballet and acrobatics.

But it was another violent experience that helped shape the man Jon Bernthal is today. He recalls it was his third day in the country and he had forgotten his identity papers in his room, a definite bad move on his part. As he was going back, he saw two men grab a woman and slam her against a building wall. Bernthal being who he was ran over, taking one of the men by the arm. He told the man to stop. The man pulled out a pistol and put it right to Bernthal’s forehead. Somehow, Bernthal was allowed to walk away.

THE FIGHT THAT CHANGED HIS LIFE

If there was one incident that caused Jon Bernthal to finally put his demons to rest it happened near 12 years ago when a group of drunk men began to follow Bernthal home as he walked his dog at Venice Beach. One of the men became truly belligerent so Bernthal turned and swung on him. He hit the man hard, hard enough to knock him out and when the man hit the ground, his head split wide open.

Jon found himself handcuffed to a bench with a cop telling him, “If that guy doesn’t wake up you’re going away for life.” Thankfully the guy woke up but not before Bernthal received 3 years’ probation and a $2 million civil lawsuit to boot. The case was settled out of court, but it also changed Jon Bernthal. For the better.

Jon Bernthal’s acting career is going on nearly 20 years. It has had many highs and many lows, but perseverance is the key. He started out with small parts (actually, something he’s made a career on) on TV series such as Law & Order: Criminal Intent and Without a Trace. He also grabbed bit parts in Dr. Vegas, Boston Legal, Jonny Zero, CSI: Miami, and How I Met Your Mother. All these roles caught the eye of Oliver Stone, who hired Bernthal for World Trade Center.

At first, it didn’t go well. Bernthal recalls one he had with director Oliver Stone. This was during the filming of Stone’s World Trade Center with Nicholas Cage. In it, Bernthal played a Port Authority cop and Stone was riding all the actors hard that day, mainly Bernthal. He screamed at Bernthal and a few other actors, “You are all so fucking vain,” Stone said. Then he turned to Bernthal and stabbed a finger in his face. “And you are the worst.” Bernthal flipped. He slapped Stone’s hand away and then went after him. “Let me tell you something, dude. You might be Oliver Stone, but I will beat your fucking ass right here on this set. In front of everybody here, I will beat your ass. You got that?” It took Nic Cage to drop wisdom on Bernthal, which he finally acknowledged as being an old Stone trick. “He was just trying to get me out of my comfort zone,” he realized. “I was young and stupid.” By the way, after their big blow out on set, the two have since become good friends.

Bernthal got his first TV series with The Class. It was not a hit and lasted only one season. In between that series and his next short-lived one, Eastwick, he found parts in features such as The Air I Breathe, A Ling in the Sand, and Night at the Museum: Battle of the Smithsonian. If anything, Bernthal was becoming dependable. With a recognizable face (how could you miss that nose), Jon Bernthal was on his way.

Jon Bernthal was cast as Shane Walsh, Rick Grimes’ best friend, who just so happened to sleep with his wife on The Walking Dead. He found critical success playing the part of Shane, a role that was memorable for so many reasons. Unfortunately, his character only lasted three seasons, ending in dramatic fashion. Shane did show up one more time on The Walking Dead in an episode where a seriously wounded Grimes is reliving his past.

Bernthal reunited with The Walking Dead series creator Frank Darabont shortly after his end on the series. This was for another series, Mob City. Sadly, this one also only lasted one season.

Jon Bernthal made even more of a violent name for himself when he was cast as the uber-violent superhero Frank Castle aka The Punisher. He first played Castle on the series Daredevil and made such an impression that Netflix greenlit his own series, The Punisher. It too gained critical acclaim but for some reason, it lasted only two seasons. The irony in Bernthal’s portrayal of Castle is all about the violence. Violence is one thing Bernthal was avoiding in his private life, but now it has taken hold in his professional life.

Now 44-years-old Jon Bernthal is married to Erin Angle, daughter of wrestler Kurt Angle. She’s also a trauma nurse, which is perfect for a guy who has broken his nose 14-times. They’ve been married since 2010, and they’re still going strong. The couple has three children together. Two sons, Henry and Billy, and their youngest a daughter born in 2015.

Jon Bernthal has appeared in many movies, some of which tend to lean toward violence, while others don’t. He appeared as a psycho soldier in Fury, a corrupt cop in Sicario, but he also played subdued in Peanut Butter Falcon and in Ford vs Ferrari he played automobile executive Lee Iacocca.

It doesn’t look like Jon Bernthal will be giving up his violent characters in the near future though. He is slated to be in the prequel to The Sopranos, The Many Saints of Newark, though his role has not yet been disclosed. He is also scheduled to appear in the feature King Richard, the story about the father of tennis players Venus and Serena Williams. By learning how to properly channel his violent nature, Jon Bernthal has become a force for good. 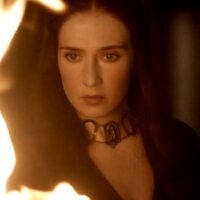 Carice van Houten: How She Went From Game Of Thrones To Sex Trafficking