Science fiction spaceships have come a long way from pointy rocket ships and flying saucers. We’ve seen such diverse designs as Star Wars’ Millennium Falcon and Star Destroyers, to Babylon 5’s elegant Minbari ships and spider-like Shadow vessels. It’s hard to guess how many different ship designs we’ve seen in science fiction film and television over the decades, but we can be sure of one thing: name a random fictional starship design and there’s a damn good chance it’s included on the massive poster up above. Created by DeviantARTist and graphic designer Dirk Loechel, the enormous image gathers I’m guessing hundreds (I’m not counting those damn things) of ships and presents them in scale comparison to each other, with 1 pixel of the full image equaling 10 meters. This is apparently an ongoing project for the artist, and the image up top represents the most recent update of the chart. You can see the full-size image on Loehel’s page, but we’re including a few segments of it here to highlight some well-known sci-fi spacecraft.

Getting all these damn things arranged in one image is impressive enough, but Loechel also seems to have tried to cluster ships from the same source together where possible. The upper left has tons of Star Wars vessels, while Babylon 5 entries appear in the upper right. Many of Star Trek’s vessels continue down the right side, including the Borg cube. I’m kind of surprised to see how much bigger Crusade’s Excalibur is than iconic Trek vessels such as the Galaxy class Enterprise D. The center of the poster has a number of vessels I’m not familiar with, primarily from the game universes of Warhammer 40,000, HALO, and EVE.

Down along the bottom you’ve got Red Dwarf’s Red Dwarf, numerous ships from Farscape, and even the “city destroyer invasion mothership” from Independence Day, measuring in at a whopping 24,000 meters. If there’s one down side to the chart, it’s that the massive variations in size requires some of the ships to be tiny simply so the scale can be maintained on the massive vessels such as the ID4 mothership. The full-size image’s text is big enough to read, but it’s still a beast to try and navigate around. Somebody needs to figure out a way to make this thing searchable. 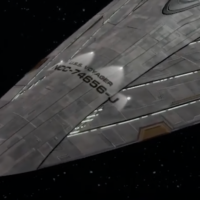