LARPing, short for “Live Action Role-Playing,” is one of those fandom subcultures that inevitably pops up at any decently sized convention. They’re the people dressed like vampires lurking in the hotel bar. They’re the folks with foam weaponry sprinting across the park yelling “Fireball!” But for any LARPers out there who think your organized make-believe events are without equal, I’m afraid some folks in Sweden just raised the bar in a serious way. How high, you ask? We’re talking three weekends, a $160,000 budget, and a retired naval destroyer. Go big or go home.

The massive LARP event unfolded this part March, during which the destroyer in question stood in for the Monitor Celestra, a ship referenced but never actually seen onscreen in Ron Moore’s Battlestar Galactica reboot. The event’s writers — yes, it had writers — came up with 140 new characters and a twisty storyline involving military boarding parties and that old BSG standard, undercover Cylons! They even had networked computers simulating BSG’s “DRADIS” sensors and other futuristic shipboard functions.

Once they were set rolling, the events aboard the Celestra unfolded differently each time, ranging from with violent ethnic cleansing to the whole friggin’ ship blowing up. Check out the video up top for a brief glimpse at the event.

If this sort of large-scale LARP sounds like a good time to you, fear not: the adventures of the Monitor Celestra may be relocating to the U.S. at some point down the road. The game’s creators/organizers are hoping to put together an American version at some point down the road, likely sometime next year at the earliest. Even for somebody like myself who has never had any interest in LARPing, this prospect is making my inner ten-year-old pound the walls inside my Bunker of Respectable Maturity.

As “gamesmaster” Martin Ericsson described the event, “”It is both about intimate character drama and sociopolitical commentary and awesome space battles.” When asked for comment, my aforementioned inner ten-year-old responded, “I WANNA PLAY SPACESHIPS!!!”

You can track future developments for the Monitor Celestra’s voyage to American shores at the official website and Facebook page, and you can read an excellent write-up of the epic LARP event on The Verge. And hey, if you do get to attend, you can always kill any downtime playing Pyramid. 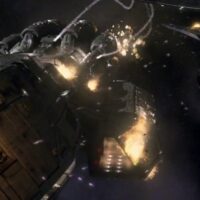