Star Wars continues to inspire real science. We’ve now got lightsabers, Skywalker-inspired bionic arms, and soon, we may be able to send a holographic message to Obi Wan via our smartphones.

California-based Ostendo Technologies Inc. has developed a projector so small that it fits into mobile phones, TVs, tablets, and even smart watches. It took the company nearly a decade to develop the Quantum Photonic Imager, a projector that consists of a single chipset the size of a Tic Tac that transmits a 3D hologram into the air via light-generating diodes. When chips are joined together, the projector will be able to transmit bigger and more complicated images. Ostendo’s chief executive envisions a time when all data sent and received by a person is in 3D. The chip offers an alternative to 3D glasses and virtual reality headsets. With Ostendo’s projector, a user doesn’t have to wear anything to have a 3D experience. Next year, the company will release the initial version of the chip, which projects in 2D, but they expect to release the hologram-projecting chip in 2016. Right now, the best demonstration is of a 3D spinning die. They will face some stiff competition, though, namely by Microsoft and Advanced Micro Devices Inc, both of which are working on virtual reality rooms. Hewlett Packard also recently founded Project Leia, a new program trying to do exactly what Ostendo’s doing with holographic projection.

Ostendo is backed by Peter Thiel, a philanthropist, CEO of Paypal, and an investor in companies such as Facebook and Modern Meadow, a 3D meat printing start-up. DARPA has also provided significant financial backing for the projector, probably because of its potential to transmit information in combat.

Among other things, holograms have recently been used to project Tupac’s 2012 performance at Coachella, and Michael Jackson’s performance at the 2014 Billboard Awards. Holographic concerts don’t have to resurrect dead stars, sometimes they also feature anime characters, such as Japanese sensation Hatsune Miku.
Leave A Comment With: 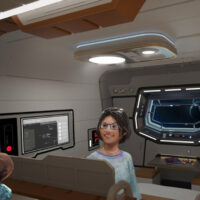