Since Vincent D’Onofrio’s last appearance as Wilson Fisk in 2018, fans have been wondering when they would see Kingpin again. D’Onofrio’s portrayal of the classic Marvel villain impressed audiences. With the character originally appearing on Netflix, many weren’t sure if he’d ever return. But a recent post from the actor shed light on this possibility.

This article will include spoilers for episodes of Hawkeye currently streaming on Disney+. In conjunction with Hawkeye’s newest episode, the actor Tweeted out a photo with a simple caption. In this way, he managed to not be too loud about the Hawkeye spoilers for the recently released episode, while still acknowledging the series.

Previously, the actor has been forced to keep quiet about this big reveal. It’s important to keep Marvel’s secrets. And then even more recently, actress Florence Pugh got in trouble with Instagram for posting spoilers. This image appeared at the end credits of Hawkeye’s 5th episode. Fans can see Kingpin’s looming silhouette over the Hawkeye title card. Vincent D’Onofrio’s caption is a reference to the often uttered phrase by Kingpin, something that would thrill fans (via Comic Book). This is a clear indicator that Kingpin has returned, and he’s kept his core personality, just how the audience wants it. Hawkeye has been ramping up to reveal many returning figures.

The episode also featured a devastating depiction of Yelena Belova’s (Florence Pugh) experience during The Snap. She experiences Natasha Romanoff’s death in a matter of mere seconds. This emotional resonance took over the episode so much so that Vincent D’Onofrio’s appearance at the end was a happy surprise. Yelena follows Kate’s (Hailee Steinfeld) mother Eleanor (Vera Farmiga) to find that she is working with Kingpin in some capacity. This is a long time coming as many had speculated Kingpin appeared in a previous Hawkeye episode as well. Kingpin will clearly be a major player which will hopefully unite Clint Barton (Jeremy Renner) and Yelena on the same side.

Kingpin’s arrival could be a game-changer. Vincent D’Onofrio’s appearance could not only mean a return for Kingpin but other classic characters as well. D’Onofrio first appeared as the character in Netflix’s Daredevil. At the time, Netflix had a hold on many Marvel properties including Jessica Jones, The Punisher, and Luke Cage. One of the most tragic consequences of Disney obtaining rights was the dismissal of all the Netflix shows (via Forbes). The sudden cancelations meant that audiences would no longer see the definitive portrayals of many fan-favorite characters. More than anything, fans have been vocal about the desire to see Charlie Cox and Jon Bernthal reprise their characters (via Movie Web).

With Vincent D’Onofrio’s return, this seems to be good news for Daredevil fans. Kevin Feige has been particularly upfront about his desire to see Charlie Cox return as Matt Murdock. Daredevil has not had the greatest luck with its adaptations. Matt Murdock was first portrayed by Ben Affleck in the 2005 film Daredevil. Although the film brought about a spin-off Elektra, it was universally disliked (via Screenrant). Netflix’s Daredevil brought more gritty realism to the property as well as a captivating performance by D’Onofrio as Wilson Fisk. D’Onofrio’s arc on the show gave backstory to the larger-than-life villain. He had trauma in his life as well as finding love with the famous Vanessa (via CBR).

As of yet, Vincent D’Onofrio is only credited for two episodes (via IMDb). This does not mean that Kingpin will not appear in the Hawkeye finale exactly. IMDb is not all-knowing and is notable for being fan-edited. More than anything, this can only be good news for a new chapter with Disney’s Marvel. Hopefully, audiences will see more of Kingpin as well as the myriad of other fan favorites. 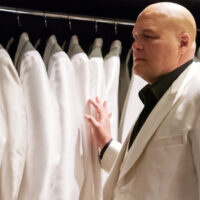 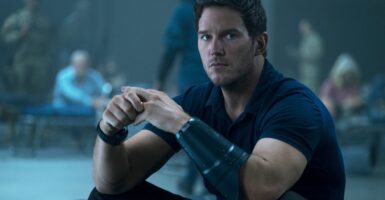