You knew it was coming. You just had to. Given the mega-popularity The Mandalorian has seen up to this point, The Mandalorian season 3 was heading our way even before Lucasfilm president Kathleen Kennedy announced it at the recent Disney Investor Day. Her words were just confirmation of what we knew but still music to our ears.

Here’s everything we know about where the series is at and where it’s headed with The Mandalorian season 3.

WHEN THE MANDALORIAN SEASON 3 WILL BE RELEASED

Kathleen Kennedy dropped a lot of Star Wars news at Disney Investor Day, talking about the many upcoming series heading to Disney+ as well as the next Star Wars movie. While all this news was exciting, intriguing, and somewhat shocking, what fans of The Mandalorian were excited to hear was that Mando will be back in 2021. Unfortunately though, he won’t be returning until next Christmas. Actually, the announcement said The Mandalorian season 3 will arrive in time for Christmas Day 2021. Christmas day in 2021 falls on a Saturday, so we are not sure a Christmas day premiere is the reality or if we will see Mando return a day earlier, on his normal Friday nights.

Either way, Mando fans will be receiving a nice Christmas present. You may now be thinking, but what about this pesky COVID that has been delaying every part of our waking life? Creator and director Jon Favreau has already said, though Variety, that The Mandalorian season 3 is “on schedule” and that they will start production “before the end of the year.” Hey, we’re at the end of the year right now!

Favreau explained how the nature of The Mandalorian allows for flexibility with production. “We’re in very small situations and oftentimes we have a lot of characters in masks,” he said. “And we also have a lot of digital work that augments things. So we’re a show that’s probably well-equipped to be flexible based on the protocols that are emerging surrounding work restarting.”

WHERE SEASON 2 LEFT US

For us to speculate where The Mandalorian season 3 will send Mando, we must take a closer look at the season 2 finale, titled The Rescue, and to get to that, we must also acknowledge the few major characters season 2 has given Star Wars fans. Not only did we get Mando back, but we saw the return of Grogu (the ever-lovable Baby Yoda), Cara Dune, Greef Karga, and Moff Gideon, but we also saw the exciting introductions to Bo-Katan Kryze, Koska Reeves, and Ahsoka Tano. Plus, Star Wars fans got what they’ve been wanting for years since his introduction in The Empire Strikes Back, Boba Fett, who appeared alongside Fennec Shand.

The season 2 finale was a whirlwind of information. The Rescue was Mando and Cara Dune going after Grogu who is being held on Moff Gideon’s ship. Bo-Katan and Koska Reeves tag along as Mando has agreed to help them with their quest to retake Mandalore if they, in turn, help him rescue The Child. This set up many things. Mando needs to rescue Grogu, Bo-Katan wants the Darksaber and the head of Gideon and, for good measure, his ship. This turns into a showdown between Mando and Gideon and another showdown between our heroes and the dark troopers.

When all begins to look bleak for Mando and crew, the real “rescue” arrives in the form of a black glove, the greensaber, Jedi uni. Yes, Luke Skywalker, along with R2-D2, arrives to save the day. How it all unfolds, well, watch the finale.

The big takeaway from the season finale is that Baby Yoda may be gone. He left with Luke Skywalker to resume his Jedi training. The goodbye was tearful and Mando even took off his helmet (sure to have consequences later) to let Grogu know how he felt. But there doesn’t seem to be any way Grogu will return. That means The Mandalorian season 3 may happen without Baby Yoda.

What does The Mandalorian look like without Baby Yoda in it? We may be about to find out.

WHAT TO EXPECT FROM THE MANDALORIAN SEASON 3

The Mandalorian season 3 will have a lot of questions to answer. The biggest, of course, is will we ever see Baby Yoda again? For now, no one knows.

We do know, from Kennedy’s announcements at Investor Day, that Ahsoka Tano was going to be in a spin-off from The Mandalorian. We also know that Rangers of the New Republic is another spin-off possibly starring Cara Dune. But now we’re also getting The Book of Boba Fett.

What does that leave for The Mandalorian season 3 to tackle? Will interacting with spinoffs be the theme theme of season 3? It seems more likely that the next season of the show will focus on Din Djarin’s relationship with Bo Katan, her comrades, and their quest to restore Mandalore. But the series could surprise us and go in a totally different direction. Din hasn’t seemed very interested in helping Bo Katan out before. Now though, with the Dark Sabre in his hand, he may have no choice.

What we know for sure about The Mandalorian season 3 is that it’ll arrive before Christmas Day. We also know, thanks to Giancarlo Esposito who plays Moff Gideon, that his character will be back for season 3 (with a slip at a possible season 4) and that Moff Gideon may play an even more prominent role.

Giancarlo Esposito told PEOPLE, “We’re living in a universe that is huge and [that has] so much to explore. So I think this show is going to start to lay the groundwork for the depth and breadth that’s going to come in season three and season four, where you’re really gonna start to get answers.”

THE BOOK OF BOBA FETT

If the reveal of Luke Skywalker and R2-D2 wasn’t enough to push anticipation for The Mandalorian season 3 to a new level, the post-credit scene truly sent fans into overdrive. It takes us back to Tatooine and Jabba the Hutt’s palace. It’s a place last seen in Star Wars: Return of the Jedi.

Inside the long since deceased Jabba’s palace sits a now very fat and wealthy Bib Fortuna (Jabba the Hut’s former right-hand man). He’s comfortably positioned, sitting on Jabba’s throne. That is until Boba Fett and Fennec Shand arrive. Bib isn’t long for this world and Boba takes his place on the throne. We then get to see title cards. The Book of Boba Fett. Coming December 2021. Say What?

The Book of Boba Fett is a seperate show, but it looks like it’ll be released at the nearly same time as The Mandalorian season 3, which means we’ll have two Star Wars shows to watch back to back. 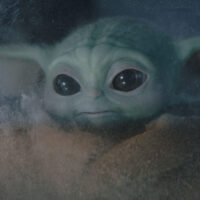 Baby Yoda: Is This The Last Time We’ll See Grogu?