Sylvester Stallone might be 74-years-old (young) but getting up in years doesn’t mean he’s slowing down at all. In fact, it’s quite the opposite. This guy is still firing on all cylinders when it comes to action movies with another one coming in the pipeline. He’s set to star as an aging superhero and we are getting a glimpse of what that looks like. Take a peek at Sly in some of the first images from his next movie Samaritan.

From the first pictures, it’s clear this isn’t going to be a run-of-the-mill superhero turn for Sylvester Stallone. He has a haggard, rough-around-the-edges, blue-collar look that doesn’t exactly scream something from comic book pages. But he also appears to be showing off superhuman strength holding up a car from falling on a young boy played by Javon Walton.

Samaritan will feature Sylvester Stallone as an aging superhero who, in his heyday, had enjoyed quite a bit of fame and notoriety for his feats. But those days are long gone and the character has gone into relative hiding after apparently having lost a major battle decades before. Walton’s character learns that not only is the dude still alive but might even be his next-door neighbor. It’s an awesome premise, a somewhat new play on the genre with an aging veteran in the main role. Check out what he posted on Instagram about getting into the role.

Joining Sylvester Stallone in the Samaritan cast is Pilou Asbaek fresh off his turn as Euron Greyjoy on Game of Thrones and fellow HBO alum Martin Starr from Silicon Valley.  From their general gestalts, I think it’s safe to Asbaek plays some sort of antagonist and Starr acts in some role as a “helper” to Stallone’s character. Is that type-casting on my part? Sure, but I’d be shocked if it went a different way.

Apparently, Samaritan isn’t the only superhero-type film Sylvester Stallone has in the works either. A couple of months ago it was reported that he’d be taking part, in some way, in James Gunn’s The Suicide Squad. There’s speculation that would be in some sort of voice role rather than live on-screen considering filming is wrapping. But details aren’t completely known at this point what part he’ll take in the flick.

Sylvester Stallone spent the 80s (and most of his career) playing some sort of action star. He’s been reprising some of those of late with 2019’s Rambo: Last Blood, as well as his Rocky character in the Creed movies. He’ll also jump back into The Expendables which was recently announced. The guy can still cut it as an action star in a major way. You can tell just by the vibe he’s bringing in the poster for Samaritan. It’s almost like we are right back in the 80s.

Samaritan had a couple of different production starts and stops because of Covid-related closings. But they’ve gotten things back on track as of October and it’s clear from the images that filming is full speed ahead. The movie is set to release this summer on June 4, 2021. Some senior citizens are sailing off into the retirement sunset. Not Sylvester Stallone. It seems like he’s just cranking things up.

A Classic Sylvester Stallone Character Is Being Brought Back Without Him 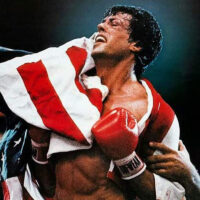