Salma Hayek is about to take a turn in the Marvel Cinematic Universe, marking the chance for the actress to step into one of the biggest movie franchises out there. But there was a time when she had a chance to become part of another set of blockbuster movies many years ago. She passed on that opportunity out of, according to her, pure laziness. In an interview with Red Table Talk (via MovieWeb) Salma Hayek says she lost out on The Matrix because she wasn’t willing to do the physical exercise needed to play the part of Trinity.

During the interview with Jada Pinkett Smith, who also has had roles in The Matrix franchise and will return as Niobi in the next film, Salma Hayek described being in the final round of auditions for The Matrix. She, along with many other actresses, was vying for the Trinity role in the flick. Hayek didn’t hold back about what went down when the rubber was meeting the road in the final bit of the casting process. She describes how some of the physical demands of the part were becoming a little much. Check out an excerpt of what Salma Hayek had to say about the casting and what ultimately happened with the role:

We’d jumped through many hurdles, screen testing, and many auditions. They brought these stunt coordinators from Asia. It was the physical test. I’m flexible and agile, but I’m lazy…I never really went to the gym and they said to me, ‘You have to run!’ I go, ‘To where?’ I couldn’t even go around the room once… They never called me again after that day.

Considering the amount of physicality Carrie-Ann Moss put into the role of Trinity in all three movies, and especially the first one, it is easy to see why there would have been an insistence for whoever took the role to be in peak physical condition. From that perspective, it doesn’t seem like Salma Hayek, at least from her own admission, would have been the right fit there. During the interview, it also came out that Hayek was surprised that Pinkett Smith didn’t land the role out of the gate.

It is easy to forget now, but The Matrix did take folks by surprise when it first came out. Though the franchise has stood the test of time and will have another story in the works soon enough, it was a totally new venture all of those years ago. Maybe Salma Hayek would have seen things differently about hitting the gym or the treadmill had she known, but it wasn’t like many if anyone knew what this franchise would become. The fourth movie in the franchise is due out this year in what will be a major return to the universe.

Though Salma Hayek didn’t land that role all those decades ago, she is stepping into the action/ comic book space coming up soon when Eternals hits the big screen later on this year. She is playing Ajak, one of the titular group of Celestials who have been living in secret on Earth for years. That film, which from early trailers looks like a stunning visual masterpiece, is set to hit theaters in the United States on November 5th. And Hayek also has a role in the House of Gucci, the Ridley Scott film which is drawing some early remarks because of the physical transformations we’ve seen from some of the cast. Other notable in the film include Adam Driver, Jared Leto, Lady Gaga, Jeremy Irons, and Al Pacino. Salma Hayek is doing fine without The Matrix. 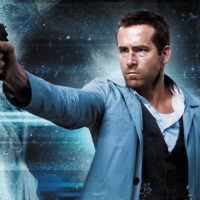